Privacy has always been an important consideration for smartphones, but over the past two years or so, it has become a key component of Android updates — Android 9 and 10 both introduced breaking changes designed to better protect users. The first developer preview of Android 11 went live today, and to the surprise of nobody, there's another round of privacy-focused features.

Android Pie kicked privacy into high gear with Private DNS support and permissions changes, but Android 10 went even further. Apps could no longer read clipboard data in the background, access to device IDs (like the IMEI or MAC address) was restricted, notifications appeared when background apps checked your location, and so on. Google said in a blog post today that so far, when given the option to only share location with an app while it's in use, about half of Android 10 users choose that option. 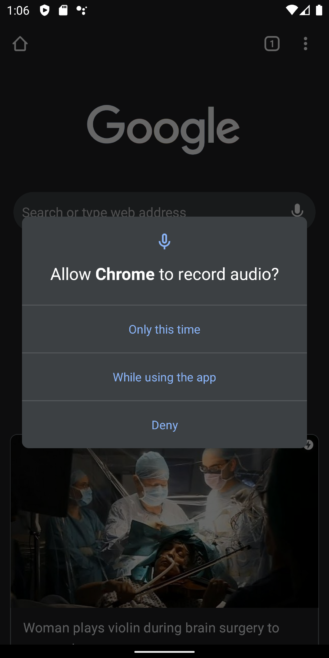 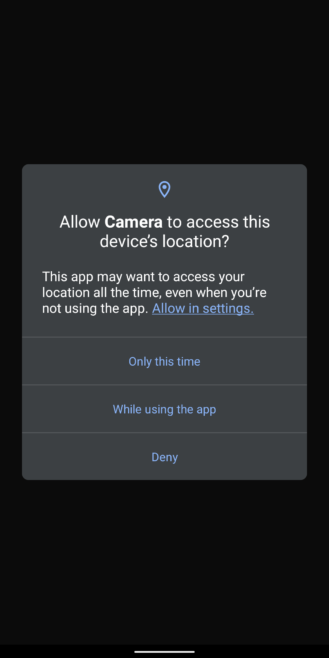 Location, microphone, and camera access can now be granted temporarily.

The first major privacy change in Android 11 is that some permissions can now be granted temporarily, instead of just permanently (or always when the app is open). The new option will appear when an app asks for access to your location, microphone, and camera, and will allow the app to use the permission until it's closed. Apple introduced a similar ability last year, with the release of iOS 13.

You might already recognize Android 11's other big privacy feature: Scoped Storage. The Scoped Storage API was introduced in Android Q Beta 2 as a way for applications to store and access data without requesting the WRITE_EXTERNAL_STORAGE permission. Each app has its own isolated storage, and instead of having access to the entire Android filesystem (like most apps currently do), only a few directories would be shared between applications — like the Music, Photos, Downloads, and Videos folders. The privacy benefit to this is that once Scoped Storage is required, apps would no longer be able to scan every file on your phone.

Google originally planned to make Scoped Storage a requirement for all applications updated for Android 10, which promptly caused an outcry among app developers. Not only does updating an app to use Scoped Storage take a significant amount of work, but the underlying API (the Storage Access Framework) is far slower when reading/writing files than the regular storage permission. FX File Explorer developer Tliebeck created an app for comparing performance between the two methods, and on my OnePlus 7 Pro running Android 10, Scoped Storage is around 11x slower than the older WRITE_EXTERNAL_STORAGE permission.

The requirement for apps to support Scoped Storage was eventually delayed to Android 11, to give developers time to update their apps, and Google seems to be sticking to that timeline. The Android 11 preview already has a few improvements to file access, including opt-in raw file path access for media, an updated DocumentsUI (the default file picker for apps), and batch edit operations in MediaStore.

Google also seems interested in improving file access performance on Scoped Storage. A recent comment on the company's Issue Tracker says that the Android team is looking into possible fixes. We haven't yet tested performance on the Android 11 preview, but even if nothing has changed yet, there's still plenty of time between now and the final release.