Microsoft’s love for Android has only grown over the last few months as the Your Phone app has gotten better and more functional with a bevy of cross-platform capabilities. The Windows maker’s deep partnership with Samsung meant that many of these features came first, and in some cases exclusively, to the latter’s high-end handsets, much like the support for RCS messages announced yesterday. Now, Your Phone will soon add a cross-device copy and paste option, which will only work if you own one of the 2020 Samsung flagships.

As pointed out on Your Phone’s support page, the feature will only work with the Galaxy S20, S20+, S20 Ultra, and the Z Flip. To use it, you’ll first need to enable it from the Settings menu of the Your Phone app on your Windows PC. Turn on the toggle provided under the Cross-device copy and paste heading, and you’ll be done. With this option enabled, you can send text and images both to and from your Android phone, though the app will resize images if they go over 1MB. The good thing here is that you can continue using the same copy and paste shortcuts that you’re used to on either device. 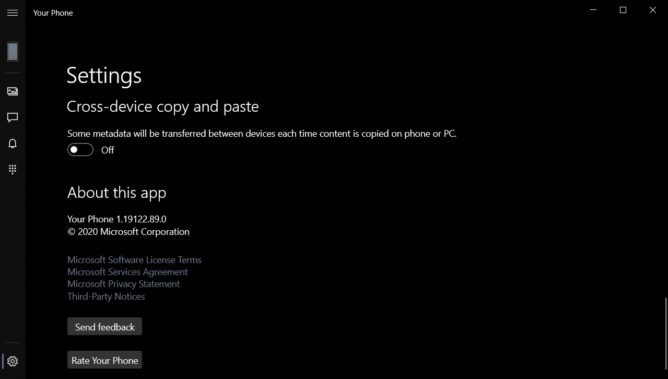 Bear in mind that if you’ve allowed the Your Phone app on your phone to sync over mobile data, transferring images when not connected to Wi-Fi will eat up your data. Copying something on one device will also automatically rewrite the clipboard on your connected devices, so make sure to use a decent clipboard manager to avoid accidentally losing some vital text.

The confirmation that Microsoft is indeed working on this cross-device feature comes about a month after it first appeared in the wild. There is no word yet on when it’ll reach the end-users, or if Microsoft plans on bringing it to non-Samsung phones.