Countless companies have fallen in pursuit of building the perfect cloud gaming service, making the idea seem more like a distant dream than a feasible reality. However, as advancements in connectivity and processing power have reached new heights, the cloud gaming segment may finally be ready for prime time — at least that's what Google and Microsoft are promising. We pitted early iterations of Stadia and Project xCloud against one another to see how they measure up on the way to the cloud gaming revolution.

Unlike a conventional PC or console, you don't need a dedicated machine in order to access games in the cloud. All it takes is a wireless internet connection with a minimum download speed of 10 Mbps (though 35 Mbps are recommended), and a compatible screen.

In the case of Stadia, players can access content on TVs via Chromecast Ultra, any computer running a Chrome browser, and the Stadia app on Google Pixel phones with wider Android support rolling out this week. iPhone expansion is also planned for later down the road, though Google hasn't released an official timeline.

In terms of input, gaming on a Chromecast Ultra requires players to use an official Wi-Fi Stadia Controller, while other screen formats can be paired with a mouse and keyboard (PC, Mac), a standard Bluetooth controller (PC, Mac, and phones), or the Stadia Controller (all formats). At this time, the Stadia Controller can only be connected to a computer or phone via a cable, though broader wireless compatibility is also expected to be available for more devices soon.

Microsoft's Project xCloud is currently in a limited preview, which has been restricted to playing on any Android phone running version 6.0 or later via the Xbox Streaming app. Before diving into a game, players must also pair their phone to an Xbox Bluetooth controller. In its initial pitch, Microsoft promised that xCloud would eventually be playable on more screen formats, but no further details have been released at this time. 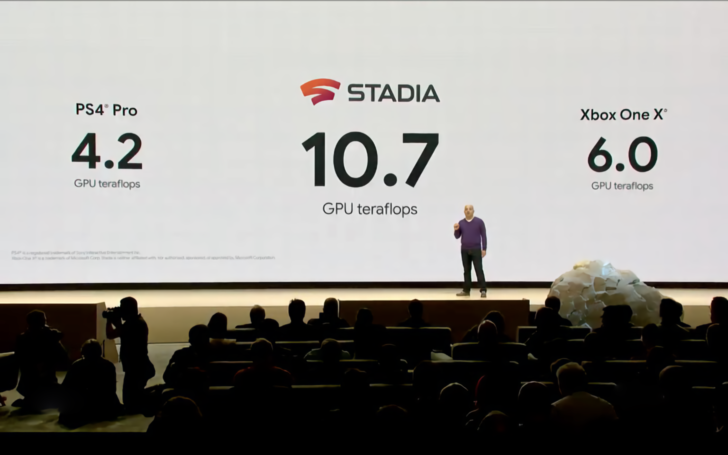 Upon announcement, one of Stadia's highlights is that it's built using custom AMD GPUs that can achieve 10.7 teraflops of power, which is more than the combined output of the PlayStation 4 Pro (4.2 teraflops) and Xbox One X (6.0 teraflops).

Microsoft hasn't released hardware specs for xCloud, but they have said that each server blade is made up of components taken from the Xbox One S. By itself, the One S can achieve a paltry 1.4 teraflops of power.

Despite having superior horsepower and load times, Stadia's game library doesn't always harness the platform in the most effective way. For instance, Destiny 2  is only able to max out at 1080p, while a similarly specced gaming PC would be able to achieve 4K quality with ease. Granted, it is up to developers to tune their games to Stadia's performance metrics, but many have yet to take advantage of its power. 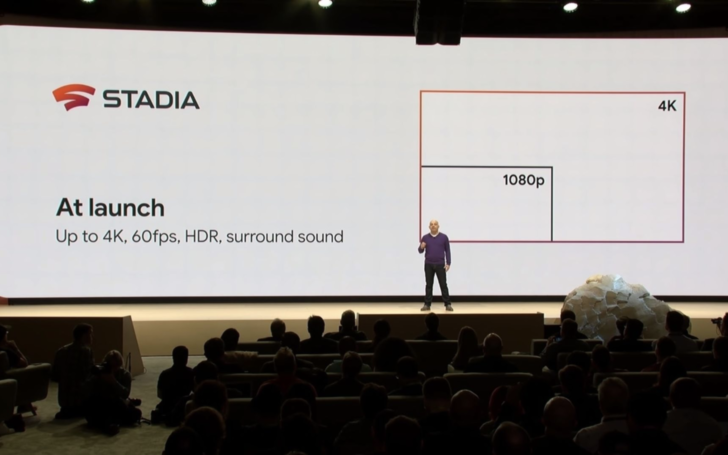 As consumer devices grow larger and become more pixel-rich, the ability to access ultra high definition content has never been more important. A highlight of cloud gaming is that it can be tuned to a variety of different displays — kind of.

At the moment, Project xCloud achieves a meek 720p stream at 60 FPS. This isn't a huge problem, since the public preview is only accessible on phones that don’t need dense graphics to look sharp, but this visual hit will be apparent on larger displays. During early demos, Project xCloud was shown streaming 1080p content at up to 60 FPS, so it is likely that the final version of xCloud will include a higher-resolution tier, though no official announcements have been made.

Stadia is capable of streaming content in three different resolutions: 720p, 1080p, and 4K HDR for Stadia Pro subscribers — all at 60 FPS, though that last rating comes with some stipulations. At the time we published this story, streaming via a Chromecast Ultra is the only way to access 4K content. This highest-tier resolution is said to be coming to Stadia on the Chrome browser soon, but no official date has been set. Also, even though Stadia Pro subscribers can enable 4K streaming, it’s up to game developers to actually permit their games to play in this high resolution.

A gaming system is only as good as the games it can play, right? If that's the case, Stadia is in a bit of a pickle. At the time we published this story, Stadia players only have access to 27 games, most of which have been available on other systems for a while.

Project xCloud, on the other hand, can currently access 87 games for free, including many of Microsoft's exclusives like Halo 5, Forza Horizon 4, and many more. When xCloud fully launches in fall 2020, it is said to support Xbox’s entire catalog of games without any intervention from developers to get them up and running on the service, which will be a huge boon for players that have already invested in the Xbox ecosystem.

This delay gives Stadia more time to add the vital games it needs to keep players interested. Stadia stands zero chance at amassing Xbox’s entire lineup in a matter of months, but Google is expecting a minimum of 120 games — including 10 exclusives — to land throughout this year. For the time being, though, Project xCloud has much more content to offer. 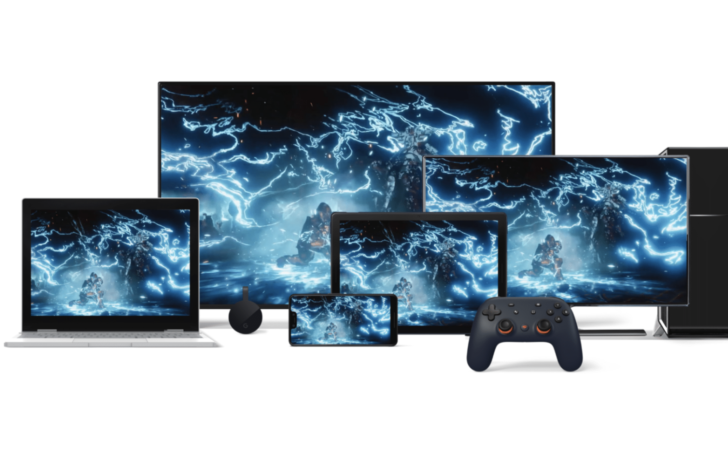 One of the biggest selling points of cloud gaming is the fact that players aren't restricted to one console, PC, or machine within their homes. They can access a quality gaming experience on any screen that can achieve a data connection — or at least that's the promise.

As it stands today, Project xCloud can only be played on Android phones; however, that is likely to change once the service fully launches. When Microsoft first announced its cloud gaming initiative, it said that being able to play on various screen formats was a goal for the platform.

Stadia, on the other hand, is much more versatile in the screen format category. Content can already be accessed on TVs, computers, and Google Pixel phones, plus more Android devices later this week. This places Google's service closer to the ubiquitous cloud gaming future that's so appealing to players, though broader Android phone and tablet support is seriously lacking right now. 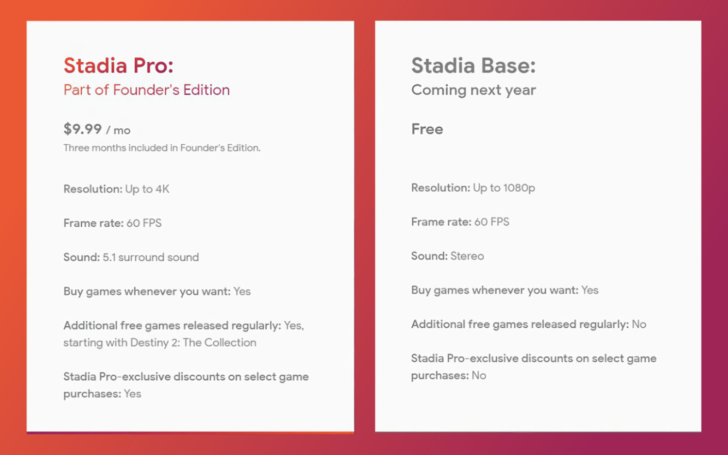 Pricing between the two cloud gaming services isn’t a fair comparison to make, because Microsoft hasn’t yet released its full business model for Project xCloud. We do, however, know Google's pricing options.

Stadia is available to early adopters who preordered the Founders Edition kit or who purchase the Premiere Edition kit for $130. Both of these come with a Stadia Controller, Chromecast Ultra, and three free months of Stadia Pro.

Pro subscribers have access to a number of free rotating games that they can claim and keep for as long as their subscription remains active. Other games can be purchased directly from the Stadia store. Once the first three free months of Pro are up, players can choose to keep their subscription for $10 a month or cancel it, upon which players will forfeit any free games they claimed until they resubscribe.

Stadia also plans to launch a free Base tier sometime in 2020. This version would allow players to purchase and play games on Stadia without any monthly fees, though streaming quality is capped at just 1080p resolution. 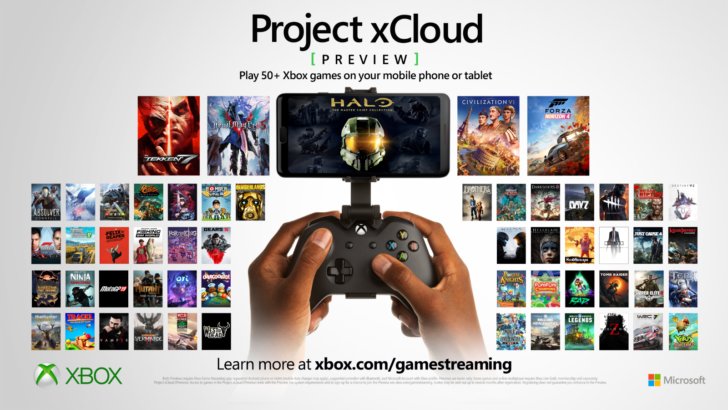 Although this next generation of cloud gaming has been hyped for years, we're only on the cusp of its full potential. Both services are technically still in different phases of early access, though one is easier to get ahold of.

Stadia is currently on the market as a paid beta. Anyone can activate the service as long as they buy a Premiere Edition kit for $130. After that, players can purchase games and stream to their heart's content — at least until their three free months of Stadia Pro expire, and they're left with the choice to renew or cancel. A full public launch of Stadia Base (free) is expected to be available sometime this year.

The only way to try out Project xCloud is to register for the preview here. After that, prospective players will have to wait to be chosen by Microsoft to participate, which isn't guaranteed. Project xCloud is also expected to be available to the public later this year. 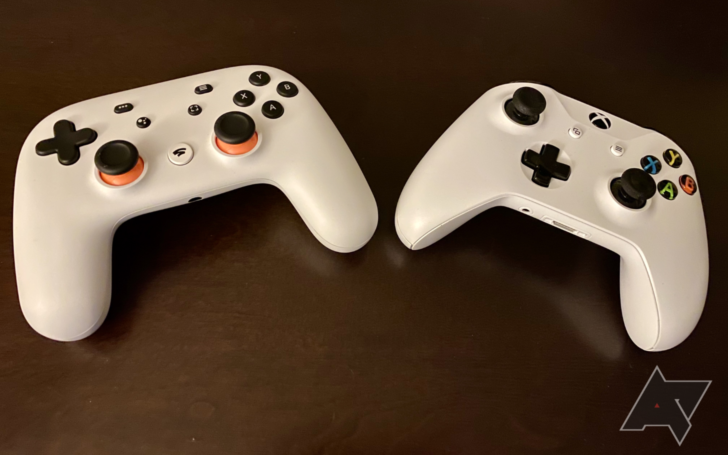 As it stands, there are many reasons to love both cloud platforms, and there are plenty of blemishes that hinder their playing experiences.

Project xCloud does a lot of things right. It's made by a gaming giant that has a robust catalog of content, a devoted player community, and loads of experience in the gaming industry. At the same time, its slow-and-steady approach to cloud gaming — which may arguably be the smarter path to take — has allowed the competition to leapfrog ahead.

The current version of Project xCloud lacks processing power, doesn't yet have a pricing model, and is currently restricted to mobile devices. The ultimate test for Project xCloud will be in how the Microsoft team beefs up performance and makes xCloud available to all the other screens in our lives (laptops, desktops, tablets, and TVs). If the company is able to scale this experience at a competitive price point, it stands to make a big splash with gamers.

Stadia has the exact opposite problem. The hardware it's built upon is truly extraordinary — games open blazingly fast and loading times are drastically reduced, sometimes even eliminated. Also being able to move seamlessly from one screen to another is just brilliant.

Despite these glorious moments of power and prestige, Stadia is seriously lacking in the content department. Google doesn't have the decades of relationships with developers that Microsoft's Xbox team can boast, and it's showing. Stadia is starting from scratch. It needs strong developer support and an abundant library of games if it is to stand a chance at being a long-term success. 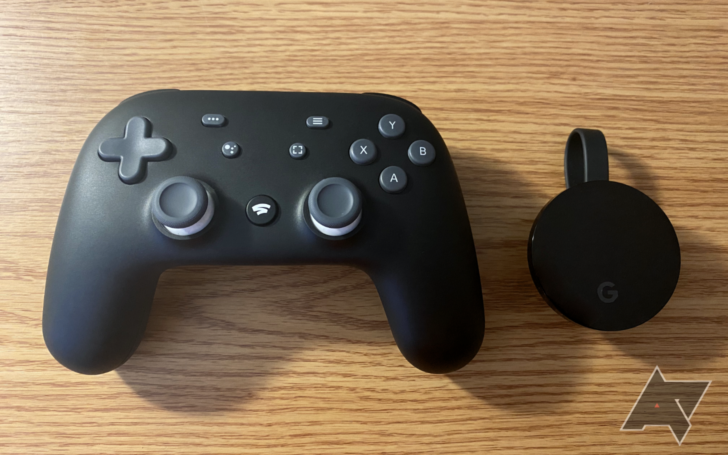 As an Xbox gamer who has invested plenty of time and money in Microsoft's ecosystem, it's hard to choose between these two platforms. Project xCloud is the ideal option, since it would allow me to keep all of my games and saved data. For this reason, a lot of other prospective cloud gamers will also choose this option when xCloud finally launches.

At the same time, Stadia has so much potential that it's impossible to ignore. With absurdly good performance powered by Google's AI prowess, this service may enable developers to build new types of gaming experiences that could transform the industry — but only if it gains enough traction to stick around.

As it stands today, Stadia is far more fleshed out than Project xCloud. It's more powerful, further along in development, and more widely available. Yes, its game library is severely lacking, but I've had a blast discovering games that I've passed up on Xbox. For these reasons, Stadia wins this particular showdown.

This story isn't over, though. Later this year, xCloud will launch in full, and we'll have a true cloud gaming war on our hands — we'll definitely revisit this subject at that time. Until then, check out Stadia if you have the chance. For all the mistakes Google has made, they've knocked the fundamentals of cloud gaming out of the park.