While you can't even buy more than two smartphones with Qualcomm's brand-new X55 5G modem in the US right now, the company has already announced the part that will replace it: the Snapdragon X60, and it comes with some seriously important improvements for US cellular operators.

I know that topics like spectrum and carrier aggregation can make anyone's eyes glaze over, but stick with me here, because this actually is kind of good stuff to know. Right now, most carriers in the US (and all of the "big four," soon to be big three) rely on a large diversity of various spectrum holdings to provide their 4G LTE coverage. But because these many different "bands" aren't contiguous, carriers employ a technology known as Carrier Aggregation (CA) to combine signal from all those various bands on demand to greatly improve connection speeds. Right now, phones like the Galaxy S10 can combine up to seven 20MHz chunks of 4G signal to achieve a much faster connection.

Qualcomm's current 5G modems, the Snapdragon X50, X52, and X55, all still support 4G carrier aggregation, but none of them support the technology on 5G, at least on America's largely FDD networks. The best that they can do is take a 5G mmWave signal (which remains exceedingly rare) and combine it with a 4G signal to slightly boost download speeds. But if a carrier deploys, say, four different bands of low or mid-band 5G, no smartphone can currently combine those bands into a single, much faster connection. Your phone just has to pick one.

As a result, 5G may actually be substantially slower than 4G on some carriers depending on where you are and how congested each network is.

This is a particular problem for AT&T, which employs the highest diversity of low frequency 4G bands that can be combined using carrier aggregation (Sprint, Verizon, and T-Mobile all use CA as well, but to a lesser extent). Right now, AT&T's "5Ge" network, which is really just a name for its LTE Advanced (Pro?) network, heavily leverages carrier aggregation to achieve higher peak speeds in some of its most important and dense markets. But as AT&T's low-band 5G network rolls out, it's going to run into a real problem: even with technology like Dynamic Spectrum Sharing (DSS), it can't redeploy too much of that 4G spectrum as 5G until a lot of its subscribers have smartphones that support 5G carrier aggregation. AT&T, though, is just the most affected by this issue: all US carriers will have to consider how and when to refarm their low-band spectrum to 5G, and 5G carrier aggregation is a key consideration in doing so. 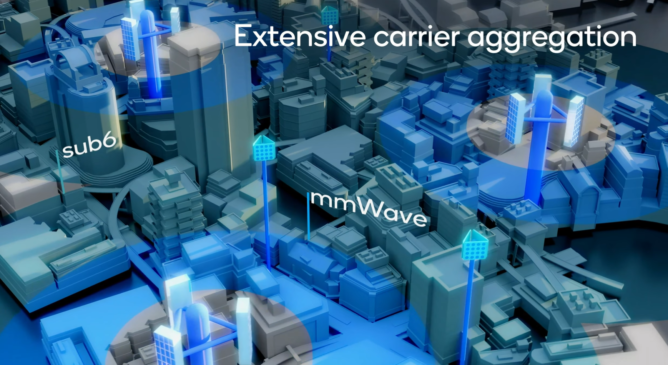 Enter the Snapdragon X60. The X60 is the first 5G modem from Qualcomm that will support 5G carrier aggregation across a diversity of bands. It will be able to aggregate not only within sub-6GHz bands, but across mmWave and sub-6GHz bands, and do so regardless of whether those bands are TDD, FDD (the dominant standard in the US), or both. 5G carrier aggregation is a critical step as we move toward the deployment of standalone (SA) 5G networks that will see not just the periphery and edges of networks employ 5G standards, but carriers' entire core network infrastructures. That will eventually lead to things like the ultra-low-latency networks we've been promised as part of the 5G experience. Still, it's going to take years for this technology to proliferate, and 5G carrier aggregation is just one piece of a very, very large puzzle as we slowly make our way forward.

Unfortunately, we're already hitting road blocks. T-Mobile has indicated to investors that an arguably even more important stepping stone in transitioning our legacy 4G low-band networks to 5G has hit a serious snag, saying that DSS is performing much more poorly than anticipated in initial testing (for what it's worth, Verizon contests this characterization of the situation).

Anyway, for more about the Snapdragon X60, hit the link below.