The dark mode rollout was a pretty smooth experience for some of Google's apps, which received a single update with a new toggle for dark/light/automatic theme and that was the end of it. For other apps, it's been a rollercoaster of updates, rollbacks, server-side switches, and inconsistent experiences across Android versions and phone brands. Google's search app is one of the latter, but the company now claims dark theme is available to everyone on the app's beta channel.

Google says that the search app's dark mode was previously limited to Android 10 devices, but has been enabled for all beta users (implying older versions of Android too) starting February 12. There's no mention of a Pixel-only requirement either*.

Obviously, between the claim and reality, there's a big schism and our observations so far don't align with Google's statement. For example, our tipster Gurkanwal has the dark mode setting on his Mi A1 (Android 9) with Google app beta v10.96.12.21, while another tipster, Samarth, doesn't have it despite using a Poco F1 (Android 10) with a newer beta v10.96.12.29. 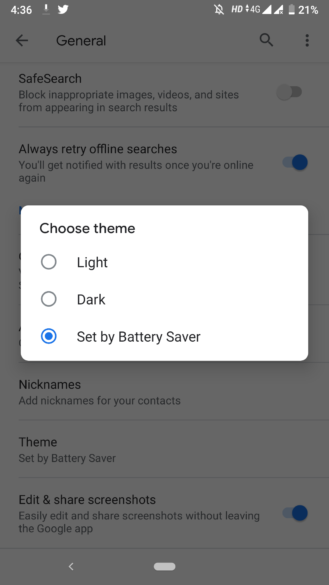 It could be that the dark theme is still rolling out server-side to beta users, or it could be that Google enabled it in one beta then rolled it back in the next one. We've seen this happen enough times to know it's quite likely.

Regardless, it seems that we're moving in the right direction and Google is finally ready to flip that dark mode switch for everyone in its search app — and thus Assistant too. To make sure all the odds are in your favor, you need to join the Google app's beta test and wait for it to get updated from the Play Store, or manually download the latest beta from APK Mirror.

* A bit of back story: In recent months, anecdotal evidence emerged pointing to the Google app's dark mode being restricted to Pixels. We looked into it, checking dozens of devices on different accounts and in a variety of countries, and while most aligned with that theory (Pixel = dark mode, no Pixel = no dark mode), we found one OnePlus 6T with Android 10 that had the dark mode setting in the Google app. Although an outlier, it negated the anecdotal evidence and since we can't possibly check every device out there, we couldn't discount the possibility of a limited server-side rollout for non-Pixels.