It has been a mere four months since Google unveiled the Pixel 4, and it's already time to be on the lookout for Pixel 5 leaks. Over in the Android Open Source Project (AOSP), a Googler has added a seemingly innocuous comment that confirms what we already expected: Google is working on a Pixel 5.

The comment doesn't tell us much about the device—it's associated with a low-level optimization feature called UndefinedBehaviorSanitizer (UBSan). It's apparently causing some bootability issues, so developer Elena Petrova is fiddling with it. The comment also notes that the "Pixel 5" is currently running Linux kernel 4.19, whereas the Pixel 4 is on 4.14. Here's the full text. 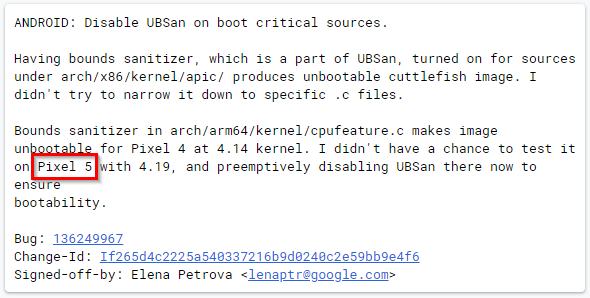 So, there's probably a Pixel 5 floating around at Google in some stage of development, which should not come as a surprise. What is mildly surprising is that we haven't seen much about the supposed Pixel 4a. Rumors suggest that will be the next Pixel phone out of Google, possibly appearing at I/O in May. That thing should be falling off a truck any day now.

You can now set your Sonos speaker as Google Assistant's default