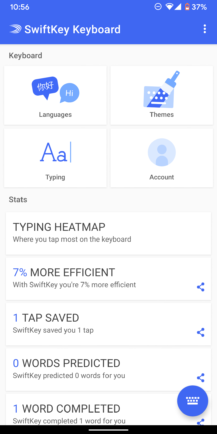 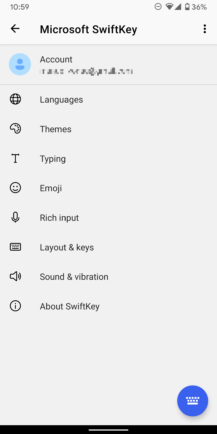 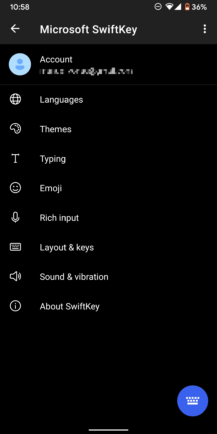 Previously, SwiftKey's settings were populated by four large buttons that took you to different subsections and an area dedicated only to your typing stats. In the beta update, the top-level sections have been reorganized to be more granular from the get-go, giving you access to features that were previously mostly hidden in the typing section. For example, you can access emoji, layout, and voice input settings without extra taps now. Microsoft has also decided that it's time to put its own name front and center following its 2016 acquisition, as the app bar title has been renamed from "SwiftKey Keyboard" to "Microsoft SwiftKey." The app settings also already respect Android 10's system-wide dark theme, though the keyboard itself doesn't just yet.

The typing stats have been removed from the main menu and can now be accessed via Typing -> Typing stats, so they're rather hidden. I don't think that's a bad decision since the stated percentage-based improvements in writing speed must be taken with a grain of salt — after all, SwiftKey doesn't have access to other keyboards' writing stats on your phone it could properly compare itself against.

It's a bummer that keyboard themes aren't automatically switching according to the system-wide dark or light mode yet, but Microsoft will likely add that functionality as part of another app update. The current changes are live in beta version 7.4.9.9, which you can download on the Play Store. Since it's an extra listing, you can use the keyboard's stable release alongside it.