Numerous complaints on this Google Photos Help post confirm that videos created using the low-storage codec will open for editing but then refuse to save once alterations have been made. The original poster was using a Pixel 3, but it's not exclusive to that device — further comments come from owners of Samsung, OnePlus, and other Google phones. A similar issue was reported earlier this month by PiunikaWeb. 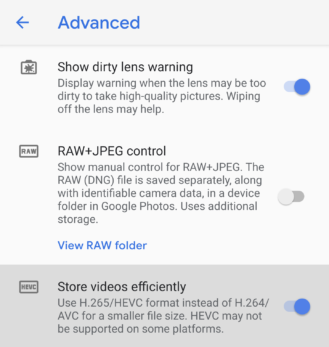 Apparently, the Google Photos 4.29.0 update provided a fix back in November of last year, but a flurry of more recent reports suggests the bug is back in the latest version of the app and more widespread than before. The only workaround, for the time being, seems to be reverting back to recording video in the older H.264/AVC format so you can edit and save at will. In the meantime, we can only hope that Google will devote some time to finding a permanent resolution for the problem.

An Android Police reader has tipped us off that Google Photos v4.38 patches this bug. We shot a 10-second video encoded in HEVC, backed it up to the service, then cut it down to 4 seconds and arbitrarily added on some stabilization in the Photos editing suite. It took us about a minute to process, but the edited clip did get saved here.

If you're looking for that editing fix, update your app in the Play Store.