Xiaomi intends to press on with its MWC event on February 23 in the face of coronavirus concerns, but it will be taking the necessary precautions to ensure the safety of its staff and guests. Since the Mi 9 smartphone series was launched around this time last year, we were already expecting its successor to be announced in Barcelona. It looks like it will be unveiled in China ten days before then, on February 13, and the company has taken to Chinese social platform Weibo to tease the Mi 10.

More than just alluding to spec details, Xiaomi has shown us exactly what its latest flagship will look like. The image below tells us some important details about the Mi 10 that distinguish it from last year's model. The waterdrop notch is being swapped out for a punch-hole while the display also appears to have slightly curved edges this time around. 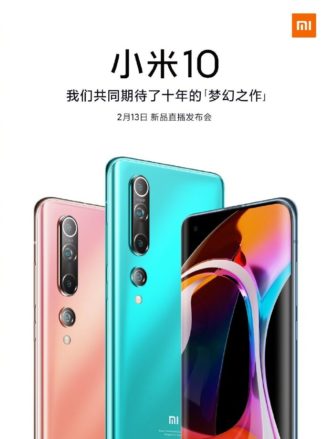 On the back, the design language is carried over from the Mi 9, but it's clear we're getting an extra camera lens — that's four in total. If you look closely, you can make out the 108MP label below the main shooter, confirming that it will use the same sensor as the Mi Note 10. It's likely that we're looking at a Pro version of the Mi 10 as a standard version featuring a 64MP main camera is also on the cards.

We know the Mi 10 will be powered by Qualcomm's Snapdragon 865 chipset and be 5G capable thanks to a reveal earlier in the year, and other Weibo teasers point to a unique VC heat dissipation system that should keep the phone cool under pressure, even when playing more intensive games. This is especially important to consumers in Xiaomi's home market where mobile gaming rules the roost. 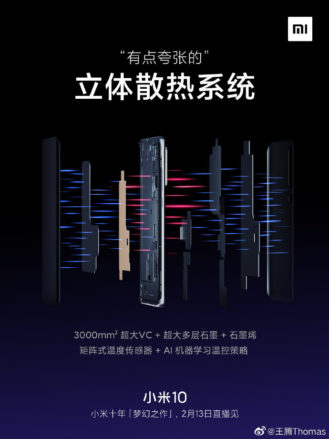 Other rumored specs for the Mi 10 Pro include up to 12GB of RAM and 66-Watt fast-charging. It's also set to use UFS 3.0 storage. We'll learn more about the phone when it's officially revealed in China in a few days and we'll find out about global pricing and availability at MWC.