Samsung's next foldable phone, the Galaxy Z Flip, has already been leaked quite a bit. The company has yet to say anything about the Z Flip publicly... until now, anyway. A commercial for the device aired during the Oscars Academy Awards show tonight, giving us a first look at the phone outside of leaked images and videos.

The below ad shows off the folding screen of the Galaxy Z Flip, and shows off some of Samsung's built-in applications that have been modified to work better with the super-tall layout. The small display on the front is also shown providing information about an incoming call.

Samsung just showed off its new Fold during an Oscars commercial. That’s one way to announce something. pic.twitter.com/rtSJ3jvkif

While the commercial doesn't actually mention the Z Flip by name, it does say that more will be revealed at Samsung's Unpacked event later this week.

Another Galaxy Z Flip ad has appeared, this time leaked by @h0x0d. The two-minute-and-twenty-second advertisement has about three seconds of useful information as we see a soulless, corporate-looking drone walk for a small eternity down a monolithic outdoor space, repeatedly mumbling an echoed "I'm not ready" and laughing to himself in Joker-fashion disturbingly.

He stops before a sheet of water, pocketing a floating Galaxy Z Flip with racing stripes. Finally stating simply, "I'm ready," the sky-spanning waterfall parts at his touch, the gray corporate din broken by light on the other side, and he walks through — good thing it does, because I doubt that Z Flip in his pocket is water-resistant. 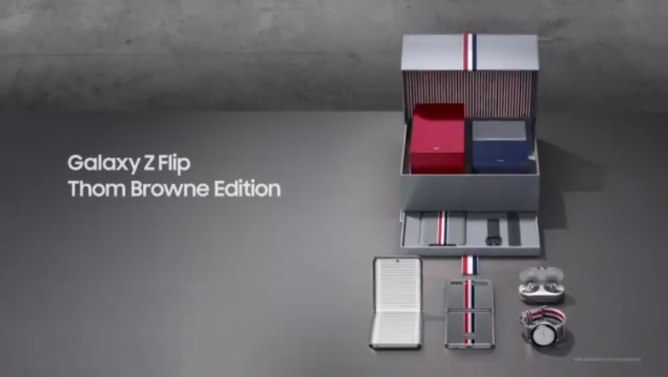 The ad is for a Thom Browne Edition Z Flip that will probably cost an additional arm and leg above the base phone, which Max Weinbach claimed would be around $1,300. Images of the box and its contents imply it will come with a pair of Galaxy Buds (probably the leaked upcoming ones), a watch with matching stripes, and some cases/straps/accessories for the included bits.