Google has recently tweaked how you get to your phone backups from the desktop version of Google Drive. Previously accessible from the navigation menu on the side, they've been relocated inside the "Storage" view that shows all your files by size.

Above: The Message you'll see accessing Drive, warning of the change. Below: Viewing your backups in Google Drive on desktop/web. Note there's no sidebar shortcut to your backups anymore.

It's a minor change, but honestly, it makes a lot of sense. Most of the items in the sidebar menu are things you will frequently access, while the whole point of backups is that you shouldn't need to access them at all unless something goes wrong. Furthermore, there's nothing you can actually do with those backups via the desktop Drive site except see they're there and delete them. If anything goes wrong, your phone making the backups will almost certainly let you know first.

It's a list you'll rarely need to view and can't interact with in a meaningful way — hiding it doesn't really matter. 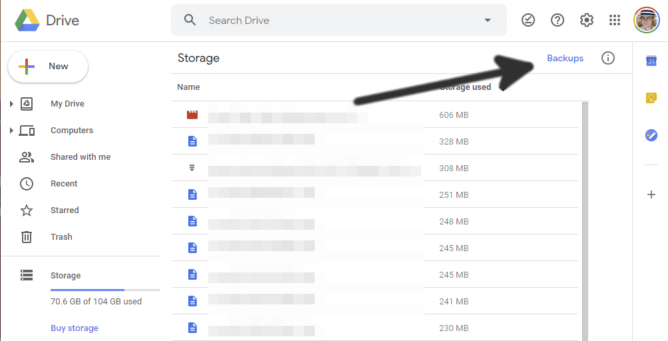 To get to the new Backups location, you'll need to:

If you prefer, you can also manually navigate there via drive.google.com/drive/backups or bookmark that URL if you need it regularly.