The lightly tweaked version of Android that OnePlus phones use, called OxygenOS, has some pretty big advantages going for it. There are even things about it that we'd like to see make their way to stock Android. But there's always room for improvement, and we've got a (slightly larger) wishlist of changes that we think could make it even better.

Give all phones Google Feed/Discover in the OnePlus Launcher

OnePlus' stock launcher has a unique feature called the "Shelf," accessible to the left of the default view and loaded with a handful of shortcuts to apps and contacts — basically nothing you can't add to your own homescreen if you wanted to. To be honest, it's kind of useless, and we'd much rather see the OnePlus Launcher have an option for Google's Discover/Feed content list. Fortunately, it is an option on OnePlus phones, but just for T-Mobile branded versions.

Only T-Mobile variants get this setting — what gives?

OnePlus' default launcher honestly isn't even that offensive. Unlike that used by many OEMs, you don't immediately need to replace it with something better. It's basically fine, except for the pointless "Shelf" foisted on us. Sure, you can disable it, but then you just have nothing but a barebones home screen. Give us all the same Google app integration that the T-Mobile versions of OnePlus phones do and we might not have to replace it with something like Lawnchair.

Possibly the most-requested feature from the last few years finally made it into Android 10, but there’s plenty of room for improvement. Even on Google’s Pixel version of the OS, there’s no way of scheduling dark mode to turn on and off at certain times despite the fact that the Night Light blue light filter (the one science no longer recommends) is able to do this. At least Pixels have a dark mode toggle in the quick settings to make it easier to enable. OxygenOS has neither of these capabilities, so the only way to use dark mode is to delve into the customization settings and change the theme. Automatic schedules and a handy toggle would make dark mode perfect on OnePlus phones. 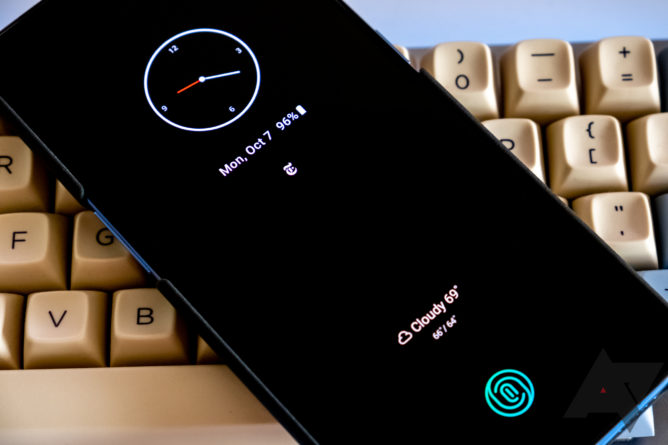 This request is even older than wireless charging among OnePlus fans, and probably more important if you ask me. It’s hard to think of another Android phone with an OLED screen that doesn’t have an always-on display mode of some kind. Even ColorOS handsets from OnePlus sibling companies Oppo and Realme at least have a screen-off clock option that shows the time perpetually. The excuse has always involved battery life, but we’re not buying that anymore — if other OEMs can include this feature without taking a huge hit in longevity, there's no reason OnePlus can't join them. Right now, tapping the screen shows us exactly what we should be getting all the time (see above photo), so this will hopefully graduate to a full AOD feature in a future update.

This is probably the simplest animation, and it's still a little too ostentatious.

Not everyone appreciates the whole "xtreme" gamer-like aesthetic that some tech companies tend to push when it comes to new concepts. OnePlus was one of the first to debut an in-display fingerprint reader in a phone, and as a brand new technology, the company highlighted it with plenty of flashy animations. That's still the case now, and we'd prefer if there was an option for something a little simpler.

The only real alternative is "no" animation, but we'd still like the UI feedback.

It's a minor point, but if that sort of look bothers you, it can become really grating seeing it every day, multiple times a day, every time you unlock your phone. Disabling the animation entirely is one solution, but then you don't get the same visual feedback, and there has to be a reasonable middle ground. One or two much simpler, more "mature" animations would really be appreciated.

OnePlus phones handle customization better than many others, in fairness, but it wouldn’t hurt to breathe a bit of life into the OS with some new options for us to play around with. A few more personalized lockscreen clock designs would be great, especially if we’re going to get an always-on display mode — some styles without the tired red accent color wouldn’t go amiss. Fonts other than the aging Roboto and OnePlus Slate could also freshen things up, as could a broader selection of wallpaper options.

Move the ‘clear all’ button

One of my pet hates in OxygenOS, the ‘clear all’ button is long overdue a rethink. I find the round icon that gets rid of all your notifications in from the shade — as well as the almost identical one that closes all of your apps — far too easy to accidentally trigger, especially since OnePlus started using in-display fingerprint scanners. If you pull down on the lock screen to expand the notification shade, the ‘clear all’ button appears in practically the same spot as the icon that shows you where the fingerprint sensor is, and this has led to me planting my thumb onto it and dismissing numerous alerts more often than I’d like to admit.

I know what some of you are thinking: it’s not the end of the world. And you’re right, of course. But if you’ve been saving up notifications for hours to deal with at a later time, it’s bloody annoying. Other Android skins make these destructive actions less conspicuous and harder to trigger unintentionally, and I’d like to see OxygenOS follow suit.

The worst part about the otherwise nice new Android 10 gesture navigation system is the positively derpy "peek" gesture you have to perform to get slide-out navigation menus working. When OnePlus debuted its OxygenOS-ified version of Android 10, it had one awesome tweak to the stock gesture navigation that made it perfect: The top 1/3 of the screen or so was excluded from triggering the back gesture. All you had to remember to do when pulling out a navigation menu was to do it from the top of your screen, and you could still enjoy the otherwise fluid operation of the new gestures.

Unfortunately, OnePlus removed it in later versions of Android — probably at Google's behest given Android 10's compatibility requirements. Whether it's Google's fault or OnePlus' fault, I'd love to see this feature return, because it was incredibly useful. The alternative "peek" gesture is both obnoxious when it does work, and difficult to trigger with thicker cases.

OxygenOS isn't perfect, but it is one of the better versions of Android out there, as most of the company's (frequently very vocal) customers will tell you. Even so, there are ways it could be made even better. Hopefully we can see some of these feature requests show up in OnePlus' future software.

Scott Scrivens and Ryne Hager contributed to this editorial.