Foldable phones, at least for the moment, are significantly more fragile than more common types of smartphones. The screens are plastic to allow folding, not glass, and the gap between the screen and phone body can allow dirt to get inside — something Samsung learned very quickly with the first batch of Galaxy Folds. We already have a general idea of how durable the Motorola Razr is, but now Zack from JerryRigEverything has given us a better picture.

The video doesn't start out particularly well, with the screen scratching very easily. The rest of the phone fares better, with most of the other components covered in metal and glass. The fingerprint sensor even still works after being scratched and dented.

Zack later tries pushing sand and rubble into the middle screen gap, and even though the sound of the display opening makes me physically recoil like I'm watching Scott's Tots, the display continues to work. Pocket sand can't hurt the Razr (at least within a few minutes).

Finally comes the bend test, where Zack tries to fold the phone backwards. Surprisingly, the Razer never snaps in half, even with immense pressure and rubble inside the mechanical components. The screen is eventually pulled out of its retaining brackets, though.

The video seems to paint the Razer in a positive light; I certainly didn't expect the touchscreen to continue functioning after dirt was shoved underneath the display. Let's hope the Galaxy Z Flip is just as (or more) durable. 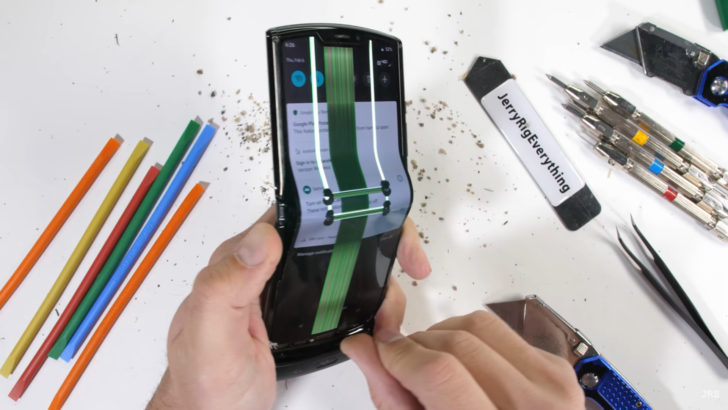