We've been following the upcoming lineup of Motorola phones for the last couple of months. Most of the specs and renders leaked pretty thoroughly just last week, revealing almost everything about the G8 and G8 Power, and giving at least a good glimpse of what to expect for the G Stylus. While the leaks have been pretty spot on, it never hurts to get a bit more, especially when it's straight from retailers — and thanks to Amazon, we now have more renders and details to peruse for the G8 Power. 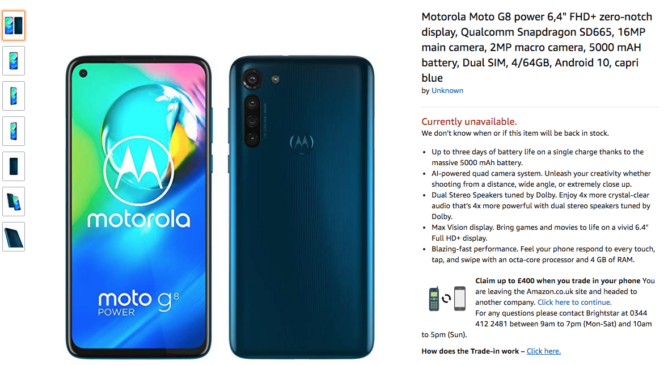 Amazon temporarily made the product listing public for several hours for both the Smoke Black and Capri Blue models. It's not clear when they went live, but they were taken down around 2AM PST.

Like most Amazon listings, the full specs list wasn't shown, but it did touch on a few of the key details. Highlights include the 5000mAh battery, dual stereo speakers, 6.4-inch Full HD+ display, 8-core processor, and 4 GB RAM. Also mentioned is the quad-camera system, which leaks tell us will be the 16 MP primary shooter, a 2MP macro lens, 8 MP wide-angle, and judging from the product description, it sounds like another 8 MP telephoto.

The product description mentions a "water-repellent design" that can handle splashes, spills, and sweat — this sounds like something between IPx4 and IPx6, but not the IPx7 or above that would mean it can survive a dunk in water.

Not much else can be taken away from the product listing, but it does bring several new renders at different angles for the two colors.