Viber announced today a new note-taking feature appropriately dubbed "My Notes." Notes are accessible from your Chats list; adding a new note is the same experience as sending a message, and your list of notes looks an awful lot like a normal Viber conversation, but with additional features to help with organization.

Notes can be checked off, so you can see at a glance which tasks you've completed. You can also save messages and media you've sent or received to your notes. Notes sync between devices, so you'll see the same ones in all the places you're signed in to Viber. Eventually, you'll be able to set reminders for notes you want to see at certain times; that feature is "coming soon." 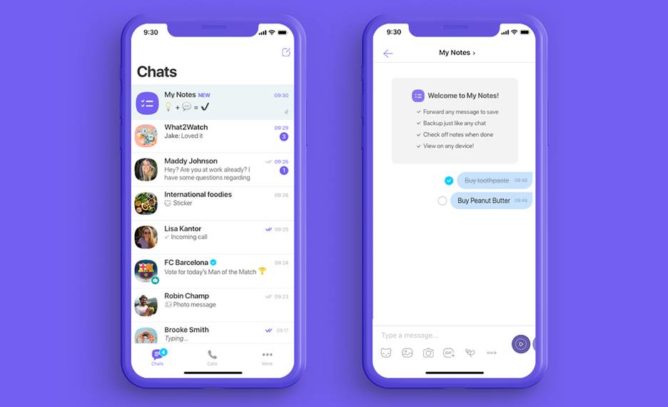 If you're already spending a lot of time in Viber, keeping notes and to-do lists in the app makes sense. My Notes is "rolling out globally" now.

Rakuten Viber to launch My Notes, a native, digital feature to organize your life within one app

San Francisco, CA, 5, February 2020 -- Rakuten Viber, one of the world’s leading messaging apps, today announced its newest feature, My Notes, to organize the biggest and smallest moments, simplify daily tasks and deepen personal connections with users is rolling out globally.
Consumers’ daily activity consists of constant multitasking—working while receiving messages, calls, and videos—making it challenging to keep track of everything in one place and people don’t want to download a standalone task management mobile app. That’s why Viber has created My Notes, a new dedicated space in users’ chat list that helps keep to-do lists, photos, reminders and more all in one place. With over one billion users and over seven million interactions every minute on the Viber app, the My Notes feature will further streamline users’ day-to-day tasks to make them as convenient and efficient as possible.

Designed for everyday messaging and organizational functions within Viber, the solution adds the ability to:

"Making everyday life easier for our users is crucial and with My Notes we take it to another level," said Ofir Eyal, COO, Rakuten Viber. "Our users already value and trust Viber because of our privacy-protecting features and faster performance. We're excited for them to experience these new tools to effortlessly organize their thoughts, wishes and tasks  all in one app."

You can enable Bixby Routines on older Samsung phones like the Galaxy S9, and here's how (APK ...