Nvidia's game streaming service has been in perpetual closed beta for years, though it has been free for everyone since 2018. Google Stadia was the catalyst for a game streaming battle, with Sony and Microsoft both rushing to bring their services to the masses, and now Nvidia is ready to do the same with GeForce Now.

Starting today, Nvidia is removing the waitlist required to try out GeForce Now, opening it up to anyone who wants to give it a shot — anyone close to one of Nvidia's server farms, anyway. Just like before, GeForce Now lets you stream PC games to a Mac, PC, Nvidia Shield console, or Android device.

GeForce Now is also keeping its pricing structure, which is what sets it apart from most competitors. Instead of purchasing games that can only be used on GeForce Now, the service connects to Steam and other game stores, so you can stream the titles you already own. There are 30 games available for free, with over 1,000 others that are playable if you already purchased them on other platforms.

Because Nvidia doesn't depend on game sales to fund GeForce Now, the pricing structure is different from platforms like Stadia. You can stream games for free, but you'll be limited to 1-hour sessions. While no limit to how many sessions you can have in a month, you might have to wait a while for a server to become available. 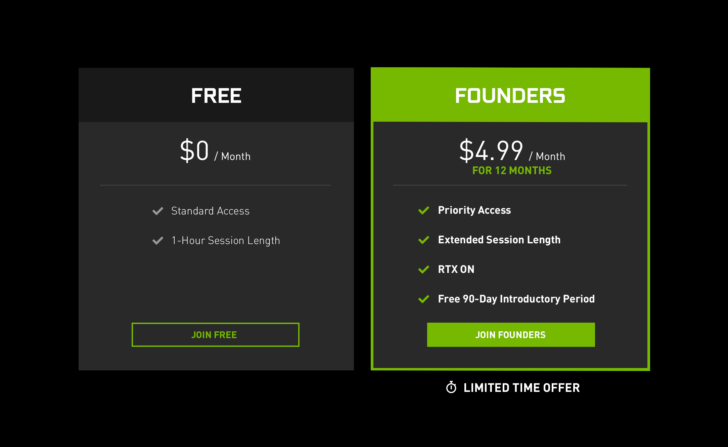 The paid 'Founders' plan gives you priority access, sessions up to six hours in length, and the ability to play games with ray-tracing graphical effects (powered by Nvidia's RTX graphics cards). The first three months are free, then you'll have to pay $4.99/mo for the remainder of 2020. Presumably, the price will increase after that point.

In addition to PCs, Macs, and Android devices, Nvidia is also working on compatibility with Chromebooks — it will be interesting to see GeForce Now competes with Stadia on its home turf. You can learn more about GeForce Now (and sign up for it) from the source link below.

You can now buy Glass Enterprise Edition 2, but it’s only meant for developers