Many people rely on Google Maps not only for its navigation instructions but also for its ability to reroute them to avoid heavily congested areas. However, since Google's mapping service relies on an algorithm making sense of crowd-sourced data, a single actor with many phones can potentially wreak havoc to the geolocation technology. That's the task German artist Simon Weckert took upon himself. He collected 99 second-hand smartphones, started Google Maps navigation on them, and lugged them around his city to generate virtual traffic jams.

Simon Weckert pulled his cart of phones across multiple Berlin streets to demonstrate the correlation between his movements and heavily congested areas on a live Google Maps card, displayed alongside video clips of him walking. With these "Google Maps hacks," as he calls the performance, it's possible to reroute traffic away from the supposedly congested area. Of course, that only works for drivers on Google Maps navigation, but depending on the country and city you're using this technique in, that might be quite a few people.

The artist was considerate enough to avoid rush hour and mostly stuck to smaller streets, so he probably only affected a handful of drivers. In the wrong hands, this technology could still disrupt traffic in some cities, and I could imagine anti-car movements adapting it for protests. 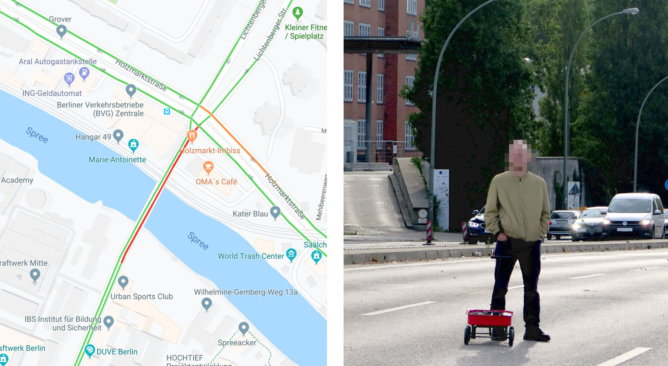 The performer references an essay on "The Power of Virtual Maps" and wants to demonstrate how cartography has changed thanks to Google's tools. With little technical knowledge and some financial resources, anyone could create these virtual traffic jams. This allows one to exercise power over the real world, making clear how interdependent our lives and online services have become. It's also interesting how simple it is for a single actor to manipulate Google's mapping service. 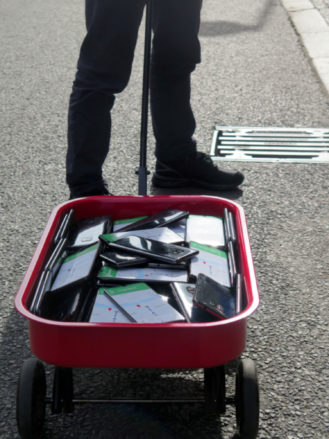 Google Maps navigation must be active to make the performance work.

A YC Hacker News user shares that this virtual jam phenomenon is far from uncommon. They say that scenery viewing points in Iceland frequently seem to be congested by traffic, while in reality, drivers tend to slow down or stop in parking lots to enjoy the outlook. Of course, both this and Simon Weckert's performance only work when phones are actively using Google Maps for navigation.

There's probably not an immediate fix in sight for Google, as a person lugging around 99 phones navigating via Maps is an edge case that algorithms likely can't account for too easily.

While you could think that Google isn't too happy about this art project, the company is actually supportive and appreciates the creative interaction with its mapping service. A spokesperson told us:

Traffic data in Google Maps is refreshed continuously thanks to information from a variety of sources, including aggregated anonymized data from people who have location services turned on and contributions from the Google Maps community. We've launched the ability to distinguish between cars and motorcycles in several countries including India, Indonesia and Egypt, though we haven't quite cracked traveling by wagon. We appreciate seeing creative uses of Google Maps like this as it helps us make maps work better over time.

In an interview with German FAZ, the artist himself shares some insight on the project, too. He confirms that all phones were equipped with their own SIM cards and were actively navigating, but suspects that the experiment could've also worked without relying on turned on navigation. Additionally, some movements have always been necessary to create the traffic jams — whenever the cart was just stopped completely, the streets would appear free again. The jam would also instantly dissolve when actual cars passed the artist. The interview ends with the famous quote, "We shape our tools, and then our tools shape us," which is pretty accurate if you think about how we allow Google Maps to shape our routes these days.

You can now search for keywords in Google Maps reviews (Update: Gone on mobile)

Pixel 4 Motion Sense will work in most countries, including Japan (Update: Live in Japan)