Ring's smart home security hardware was cheap and popular. Turns out, it was also lacking basic security protections and leaking customer data, including household locations, through its Neighbors social app — which was already contentiously sharing customer videos with law enforcement. In the wake of all these concerns, the company has today announced that it's building a new section for its app specifically for improved privacy and security settings and pushing two-factor authentication (2FA) as a default, opt-out setting on all new accounts.

The new Control Center will be rolling out via an update to the Ring app later this month. According to details provided to The Verge, it will notify you if local police have access to your video clips in the Neighbors app. The announcement itself also states that it will let you disable sharing those videos with police and see which devices and third-party services your Ring account is connected to. In the future, the company plans to offer other, more vague improvements, including "the ability to easily view and control other privacy and security settings right from the Ring app." It all kind of sounds like an afterthought, but given the time it took for Ring to take customer privacy seriously, that's probably because it is.

The Verge was also told that 2FA will be enabled by default for all new accounts, but existing customers won't be forced to migrate. It also isn't a mandatory setting (even though it should be), customers can opt-out to disable it during the setup process. Unfortunately, the company still only offers SMS-based 2FA (i.e., the bad kind that's vulnerable to things like SIM-swap attacks), but it's better than nothing, and Ring claims it intends to add other options eventually. Together with these new improvements to privacy, the company is also announcing a handful of new products for its smart home security ecosystem: New Ring Smart LED bulbs in A19 and PAR38 sizes (available April 1st), the Ring Access Controller Pro for remote access to gates ($299, available now), and three new solar lighting devices (a floodlight, steplight and pathlight, all available April 1st).

Ring's redesigned Control Center is launching as of today, and will be rolling out over the next few days for Android and iOS users of the Ring app. 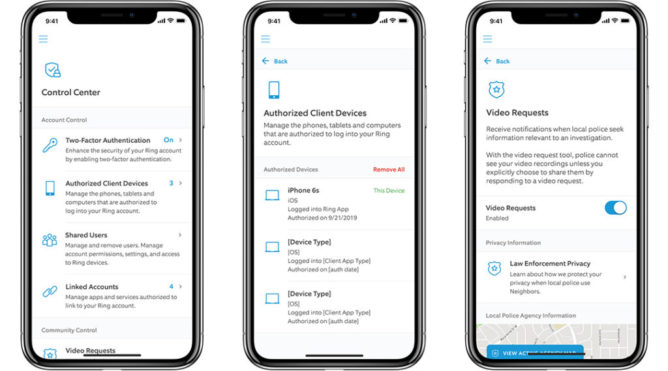 As the company previously described, the new Control Center features an indicator that tells you your two-factor authentication settings. You can also see which services and devices are linked to your account, control users you share your data with, and opt-out of receiving requests from law enforcement for your videos. In the last case, although there was already a setting that controlled sharing videos with local police, it didn't appear until after you received your first request.

In all, you'll have much easier and more granular controls when it comes to who has access to your videos.