I'm generally of the opinion that we shouldn't given attention to those who are seeking it for the wrong reasons or under false pretenses, but I just couldn't ignore this story: Escobar Inc. (yes, that Escobar) is now telling consumers that it will sell a very-much-not-a-counterfeit Galaxy Fold for the low, low price of $400.

Let us be clear from the outset: the product pictured on the company's website is very clearly a real, genuine Samsung Galaxy fold covered in a tacky gold vinyl skin with Escobar Inc's logos haphazardly slapped upon it. Let us also be clear that the phone's specs, like the Snapdragon 855 processor, 5 cameras, 7.3" AMOLED primary display, and most others are lifted straight from the Galaxy Fold.

The Galaxy Fold costs $1980. Escobar's Fold 2 costs $400. Where's that extra $1580 being made up? Probably in the gullibility of anyone stupid enough to hand this company $400. If Escobar Inc ever delivered such a product at such a price point—which it will not—it would certainly lose tremendous amounts of money on each sale.

So, why bother with such an obvious scam in the first place? I'm only left to speculate. This is so blatantly, obviously a Galaxy Fold with a vinyl wrap on it that anyone with eight functioning brain cells would be able to see it, which means that the product described here is never going to be delivered. One possible explanation is that Escobar is attempting to sell this Chinese clone of the Fold, made by a counterfeiter with an apparently long history producing Samsung knockoffs. 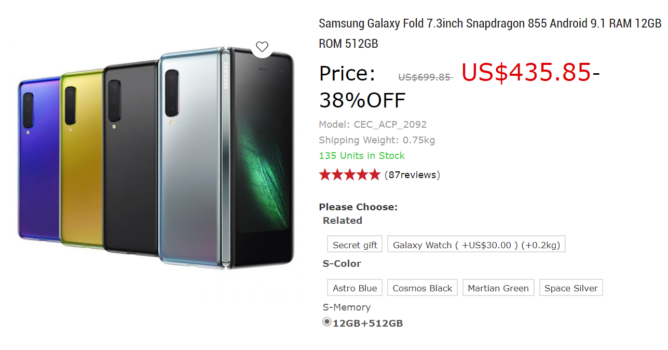 I have no idea if this "clone" phone is real, what it actually looks like, or how it works. I suspect it is merely intended to be used in the illegal counterfeit trade, sold to unsuspecting buyers through social media marketplaces and shady Craigslist ads, like phony AirPods. And I can assure you that it does not have a Snapdragon 855 processor or a 7.3" folding AMOLED display.

Anyway, the company posted a video of one its scantily-clad models destroying what appears to be a real Galaxy Fold 5G with a sledgehammer. They set it on fire. It's kinda fun. Enjoy.