Nubia, of Red Magic fame, just teased an image of a phone charging on Weibo. In it, the device claims to be topping itself up at a ridiculous 80W speed. That's a pretty impressive number, and faster than anything else we've seen or heard of in a phone before, but it also raises some concerns. It claims to be doing this via USB PD, according to the image provided, but if it is, it's breaking the Power Delivery spec to do it. 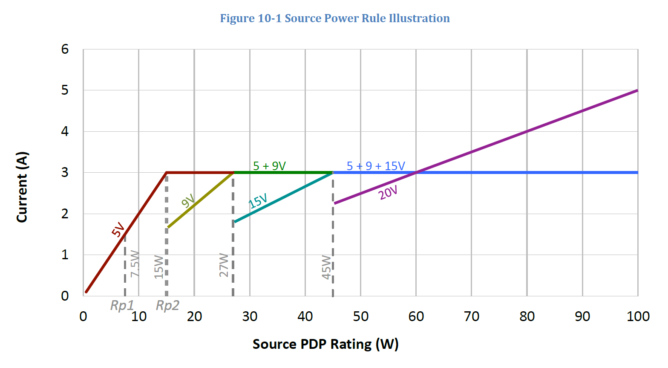 The base USB Power Delivery specification is pretty impenetrable to the layman (it's also over 600 pages in length), but so far as we can tell, it imposes a 5A maximum for current, regardless of voltage. The image above sets lower, and not upper bounds for power ratings, (there's a lot of "may" language surrounding power limits) but even cable ratings in the PD spec max out at 5A. 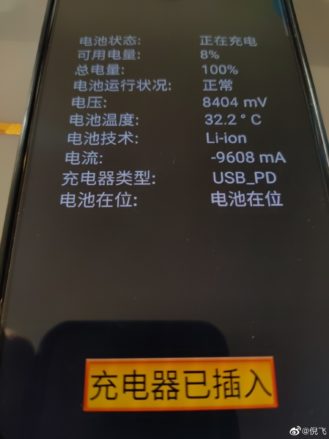 Translation of the Chinese on the USB_PD line roughly equates to "Charger type: USB_PD."

The image posted by Nubia claims that it's reaching that 80W charging rate at 8.4V & 9.6A. That's quite a lot of power and more current than I've ever seen a Power Deliver-compatible device spit or accept before. Usually, devices that reach such high wattage over USB Power Delivery do it by increasing both their voltage and amperage, hitting the 20V maximum before ramping the current much above 3A, as you'll see happen with most high-wattage laptops.

A spokesperson from the USB-IF has confirmed to us that these numbers, if implemented via Power Delivery, would break the currently published specification.

Outside the possibility/impossibility of supporting Power Delivery, this 80W number is pretty crazy. In comparison, Oppo was excitedly bragging about its 65W charging in SuperVOOC 2.0 last year, and most PD-compatible phones make do with much lower numbers — usually topping out somewhere around 15-27W, though some like the Galaxy Note10+ claim they can hit 45W via PPS. 80W is frankly a pretty stunning quantity of power for a phone to accept, and achieving it must have meant solving some pretty substantial engineering hurdles.

Android Central claims the 80W phone pictured may be the upcoming Nubia Red Magic 5G, and with MWC on the horizon, hopefully, we'll hear more about it soon.

A spokesperson from the USB-IF has informed us that our suspicions were correct and these specific rates would, in fact, break the USB PD spec if implemented as pictured. There are a few remaining explanations: The image provided by Nubia could be incorrect in stating that PD is being used and this actually makes use of a proprietary system, or we're seeing a measurement made after voltage is stepped down for the battery, or this is a PD-based implementation that breaks the official spec.

Either way, until we know more, don't expect it to work with your normal USB PD-compatible charger. We've updated our coverage with greater certainty in language regarding these details following the confirmation provided by the USB-IF.

If you pre-ordered a Pixel 4 your $100 store credit expires today, so don't forget to spend it now