The amount of records in the section is indeed impressive and probably consists of more than 100 individual releases. In contrast to other recommendations on YouTube Music, they don't seem to be based on your personal preferences but your location, though. Here in Germany, I see a few German albums, while Rita in Lebanon gets some Arabic and Hindi records. International hits are among both of our selections, such as Guns n' Roses' Bullets Over Broadway live album or Eminem's Music To Be Murdered By. I have to say that the lack of personalization makes this list hard to parse, but at least you see more releases now. 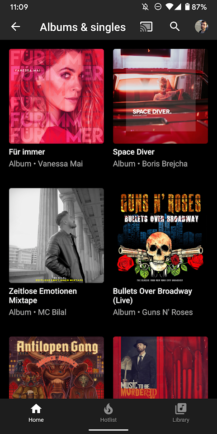 If you haven't received YouTube Music version 3.49 yet, you can download it from APK Mirror. I'm really starting to like the new streaming service for its mixes and its UX, but I still dearly miss my uploaded music from Play Music, and I still hate YouTube Music and YouTube's intertwined watch/listen history. Hopefully, Google tackles these issues next.

Our new emoji this year may include a 'chef's kiss,' fondue, bubble tea, and the dodo