Galaxy S20 leaks have flowed like water in the last month, but this time it's Samsung that's scooping Samsung. The company has a registration page live that allows you to "reserve the new Galaxy phone" — clearly the upcoming Galaxy — S20, and promising a March 6th delivery date. 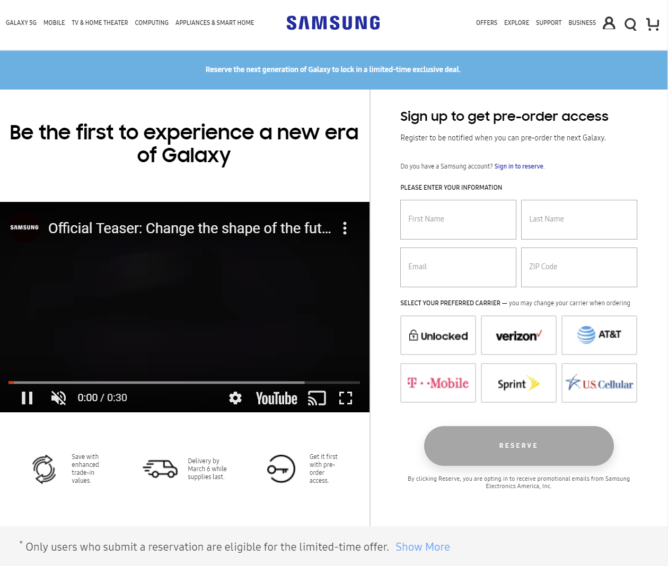 Screenshot in case Samsung decides to take the page down.

Technically, the page reserves you a spot on Samsung's email list. The form is clear that registering via the page isn't placing an order, "nor are you guaranteed a device during pre-order, as supplies will be limited." Still, for those interested in being first in line, registering should at least guarantee you'll get an email when you make a pre-order. 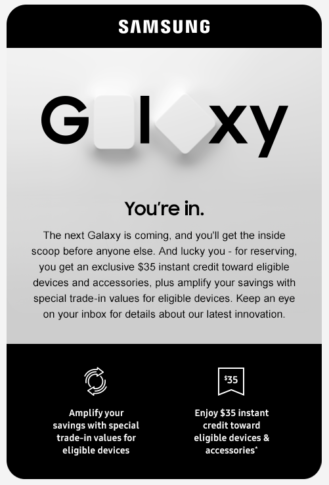 Unlike last year, Samsung isn't telling us how much we can expect to get from trade-in offers just yet, though you do get an exclusive $35 credit toward "eligible devices and accessories," as well as some sort of special trade-in bonus — so it's in your best interests to register even if you're still on the fence about picking one up.

The page also promises delivery by March 6th. If that isn't a placeholder (which is a possibility), then the phone will likely be released on or around that date, quite a bit after the February 11th Unpacked event, when we expect the Galaxy S20 series of phones phone will be revealed.

Interested parties can register to be notified when pre-orders go live, and trade-in values for phones will also be provided by Samsung at a future date. We'll be sure to let you know those values once they're available.