The new Moto 360 is almost entirely disconnected from its predecessor (it's manufactured by eBuyNow, not Motorola) and lacks the technological and design innovation that made the original watch so special. Much like a direct-to-video Disney sequel, there's not much to complain about, but there's also nothing unique or interesting to speak of. It's the Jungle Book 2 of smartwatches — not bad, but hardly comparable to the original.

Unlike the first two Moto 360 models, this new variant doesn't have an ultra-minimalist design (or a flat tire). Instead, it closely resembles a traditional watch, much like what you get from Fossil's various Wear OS products. I miss how futuristic the original Moto 360 looked, and it's a shame the new manufacturer didn't try to revisit that design. There are three style choices, though: Steel Grey (the one I received), Rose Gold, and Phantom Black.

The front of the watch has a 1.2-inch AMOLED screen, with a resolution of 390x390. It supports an always-on mode, just like most Wear OS watches. I do wish the black bezel surrounding the display was a little smaller, but nearly every round smartwatch has a similar design, so I can't complain much. Unlike most modern Wear OS watches, which have two side buttons and a center dial for scrolling, the Moto 360 has the dial on top of the second button. I'm not a massive fan of this decision; the recessed extra-small dial is harder to spin than the dials on other Wear OS watches, and it seems to be ultra-sensitive. There were times where I accidentally turned down my phone's volume because I brushed my arm against the watch.

On the back of the Moto 360, you'll find the heart rate sensor and charging pins — while the original watch used Qi wireless charging, this model has regular pogo pins. It would have been nice to see Qi charging, especially given the premium price, but this method works well enough. 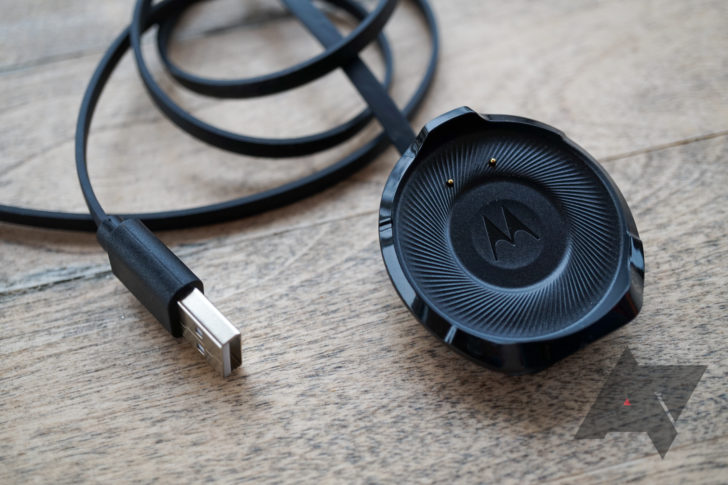 There are a few callbacks to the earlier Moto 360 models. The charger props itself up at an angle, mirroring the dock that came with the original Moto 360. The watch's box also closely resembles the round box that earlier models came in. Finally, there is a surprising amount of branding: "Moto 360" is written on the band and the back of the watch, and the Motorola logo is carved into the dial and band buckle. 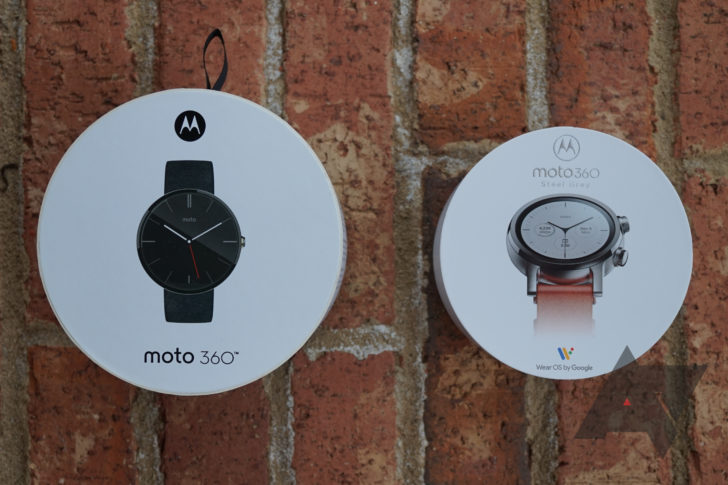 In the box, you get the watch, two bands (one leather, one silicone), the USB charging dock, and a quick start guide. There's no USB wall adapter included, but most of you probably have some spares lying around.

The Moto 360 ships with the latest version of Google's smartwatch operating system, complete with the new Tiles interface, Google Pay support, and the much-loved Google Assistant. 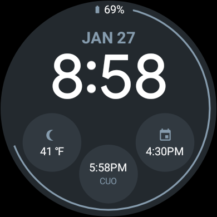 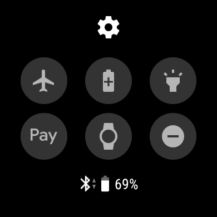 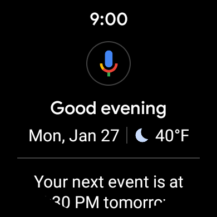 Manufacturers typically don't customize Wear OS very much, but this is about as vanilla as the platform can get. There are no special apps preinstalled, and the watch face selection is much smaller than you would get from a Fossil smartwatch. There are 11 faces preinstalled, including ones created by Google, but there's still a decent mix of analog and digital options. I wish some faces from the older Moto watches made a return here — it only adds to the feeling that this watch isn't a true Moto 360 successor.

The new Moto 360 is one of the few Wear OS devices available right now with 1GB of RAM, just like the Fossil Gen 5, Skagen Falster 3, and some other recent models. That means performance is as good as you can get from a Wear OS watch: apps open quickly, and there is very little lag with animations.

Battery life is generally good, as far as smartwatches go. I typically had the watch on for 12 hours out of the day, with the always-on display and heart rate sensor enabled, and the Moto 360 always had around 50% left when it was time to charge for the night. I think most people could get two days of use on a single charge without turning off too many features. 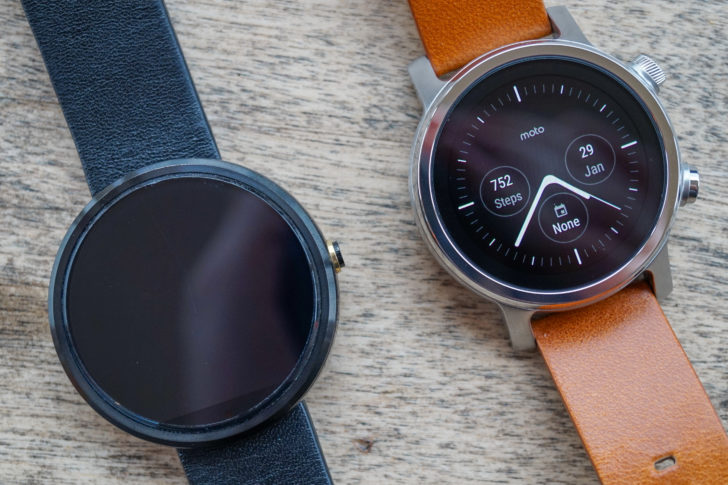 Probably not. The new Moto 360 is a decent product on its own, but it doesn't make much sense to spend $350 on it when you can buy a Fossil Gen 5 for around $250 (it has even dropped as low as $170). Not only does the Fossil Gen 5 have identical internal hardware, but it also has a few extra software features, more included watch faces, and an extra customizable side button.

It's possible the Moto 360 will have its price slashed in a few months, but I don't think it would make sense to buy one until it's significantly cheaper than the Fossil Gen 5. There's nothing that sets this third-generation Moto 360 apart from the competition, and that's a mighty shame.

OnePlus 8 series may support wireless charging, finally putting that glass back to use (Update: ...

Arlo Look Back is now Foresight, brings its longer recordings to the Video Doorbell