While Google has been having issues with its multilingual speech-to-text algorithms, the company can generally be considered a cross-language processing pioneer thanks to its easy-to-use Translate app. The service is growing ever more powerful and has only recently seen improvements in offline accuracy and a better real-time camera-based translation. Behind the scenes, Google is already working on the next big thing for Translate and has demoed live transcriptions of translations, letting you listen to one language and read in another.

The feature seems to be similar to Google's new Recorder app that automatically turns your spoken notes into text, but goes one step further and translates those words instantly. In contrast to Recorder's and Translate's offline functionality, the new service will rely on the internet in the beginning, as it still needs a lot of processing power. 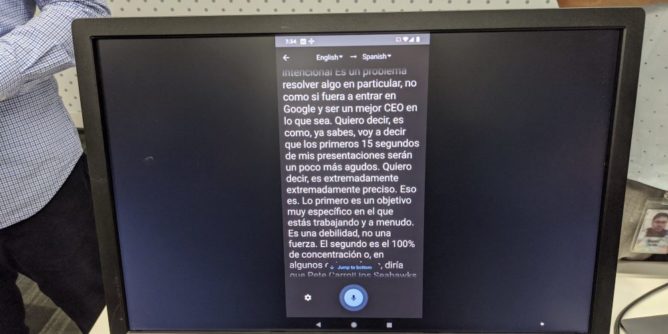 Transcribe will continuously evaluate your sentence structure as you speak and will correct wrong words or misunderstandings on the fly while adding punctuation, depending on context. Google says that translations won't be 100% on point, but that they will be accurate approximations — professional translators won't have to fear for their jobs just yet. As with all AI-based services, the recognition will improve the more people use it. For now, you also can't feed Translate audio files to transcribe, but you can always play files back on speakers for the service to listen to.

Google hasn't shared when it wants to launch the transcription service, though you can get a glance at it by using the Conversation feature in Translate. It lets you talk to people who don't speak your language and transcribes your words in both your native tongue and your conversation partner's language.