A new "add to playlist" button is appearing for some in Google Podcasts. As of now, trying to actually use the button doesn't do anything, but its inclusion is likely an indicator that playlist/queuing functionality will eventually come to the app, a frequent complaint against Google Podcasts since it launched. 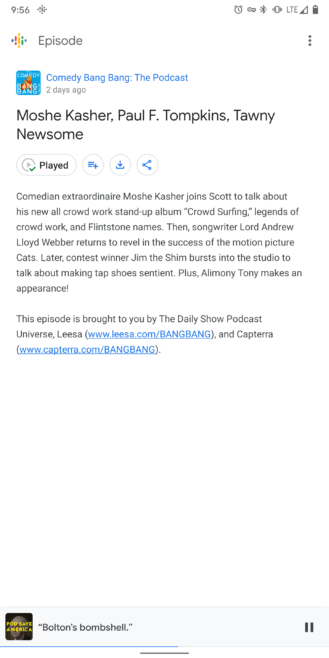 Note the new "add to playlist" button to the right of the "Play/Played" button and left of the download button Visually, it's three lines with a plus sign in the corner.

The currently non-functional button appears as you see above, just below the title on the episode view screen, between the playback button and the download button. Right now, the button is superfluous, tapping it doesn't seem to do anything, and it appears that it's only showing up for a handful of folks — potentially tied to a recent Google app beta update.

If this new button is a herald of coming queue/playlist feature for Google Playlists, then it would address one long-standing complaint regarding the app, providing it with much-needed functionality to compete with Pocket Casts and Spotify.

More details regarding this change were revealed in a recent teardown. The new playlist/queuing functionality is part of a larger future update, which will include renaming the "Search" tab to "Discover," new content discovery tools like a "Popular & trending" carousel.

The queuing functionality previously spotted will get its own tab in the Activity section of the app, allowing you to rearrange podcasts for future listening, and the buttons to add items to your queue appear on the app's homescreen as well.

Ubisoft jumps into the auto battle genre with Might & Magic: Chess Royale (Update: Out now)