It would appear that the pre-registration for Shadowgun War Games was announced last year, though the title has been missing in action since that announcement. Thanks to a recent press release, it's clear that Madfinger Games hasn't given up on the title, and is now offering a beta sign-up on its website, and since registration is open to anyone, only so many slots in the beta will be available, so make sure to sign up soon, or else you may miss out.

The above teaser trailer offers a cinematic look at the game, though there is zero gameplay shown. What we do know is that the game will feature heroes from across the Shadowgun series in 5v5 capture-the-flag battles. Unique weapons are tied to each character, and you'll have to strategically build out your team in order to find success. The game will play in a first-person perspective, and high refresh rate device support is expected, which makes this title a good choice for the ROG Phone II.

Since there are still very few details surrounding this game, it's still unknown how it will be monetized. It's my hope that this monetization will resemble the system found in Shadowgun Legends, where the majority of in-app purchases are for cosmetic items. We also don't know when the game will be officially released, though I suppose the upcoming beta is a good sign we are nearing that date.

So yeah, if you're interested in testing out the next Shadowgun game from Madfinger, now's your chance. You'll first have to fill out the beta sign-up form on the official Shadowgun War Games webpage, and then cross your fingers that you'll be accepted. As I already stated, this is a limited offer, so make sure to sign up soon, or else you may miss out.

Copenhagen, Denmark - 24th September 2019 - MADFINGER Games is excited to reveal that
beta sign-up for Shadowgun War Games, their eagerly awaited multiplayer shooter, is now
open. Gamers can register to become the first players to experience the follow-up to the
award-winning Shadowgun Legends.

MADFINGER is celebrating the news at Unite Copenhagen, where attendees will also get
the chance to play the game for the first time in 5v5 battles. Working closely with Unity,
MADFINGER was also part of the keynote, showing live gameplay and giving a tech talk
revealing how the studio uses Unity’s real-time 3D development platform to create hit games.

“We’re thrilled to announce the beta sign-up for Shadowgun War Games,” said Marek Rabas,
CEO of MADFINGER Games. “We can’t wait to see how our community and players around
the world react to what we’ve created. It’s a great game and people are going to love it.”

“We’re really proud to see what MADFINGER has managed to achieve using our development
platform,” said Brandi House, Head of Product, Cloud. “It’s a wonderful game and we’re so
happy they could join us at Unite Copenhagen to share the news with the world.”

The news comes shortly after the studio confirmed their partnership with ASUS. Shadowgun
War Games is designed specifically to make the most of their ROG Phone II, with optimized
performance and special features that will delight hardcore gamers. ROG Phone II players
will also receive exclusive cosmetics for their in-game character.

The beta only has a limited amount of spaces available, so interested players are encouraged
to sign up asap to avoid missing out. You can sign up here.

MADFINGER Games is a world-class independent game developer with a focus on mobile and console platforms.
Founded in 2010, their games quickly shot to the top of the charts in sales and hit the #1 spot in over 100 countries.
MADFINGER Games is renowned for stunning visuals and outstanding gameplay experiences, which have received
worldwide acclaim and a series of prestigious awards, including Google Play’s “Most Beautiful Mobile Game 2019”.
The studio’s most popular titles are Shadowgun Legends, Unkilled, and Dead Trigger 2.

In September, we learned that Madfinger Games was offering a beta sign-up for Shadowgun War Games for those that wanted to test the 5v5 battler before its official release. Today the game has finally arrived on the Play Store as a pre-registration listing. While details are still light, if you'd like to see the game in action, the developers will offer a live stream on Twitch at 10 AM EST. While we still don't know when the game will be officially launched, it's now clear that the title will offer in-app purchases and advertisements, thanks to the new Play Store listing. So if you're eager to get your hands on this title and would like to receive a notification whenever it's officially launched, you can pre-register through the Play Store widget located at the bottom of the page.

Shadowgun War Games will be officially available on February 12 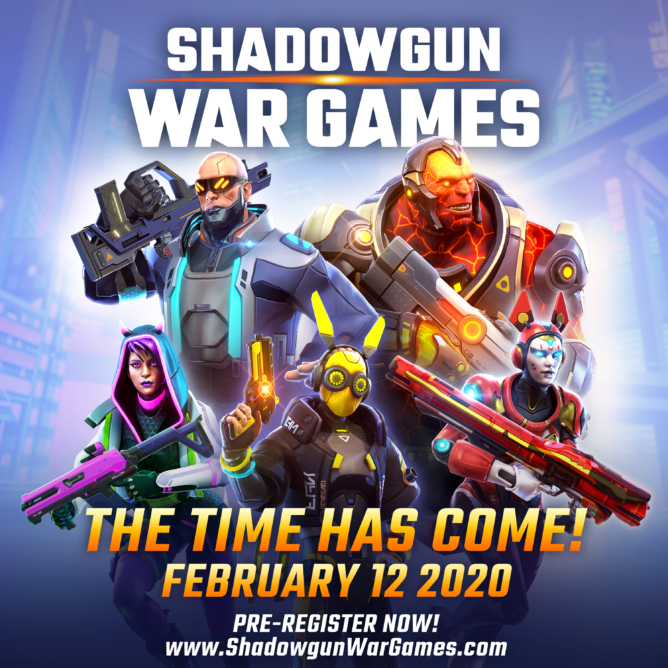 MADFINGER Games has just revealed that its upcoming team-based tactical shooter Shadowgun War Games will be officially available on February 12th. The game has been listed on the Play Store for pre-registration since September 2019, and so it would appear that we only have fifteen more days to wait until the official release. Ideally, Shadowgun War Games will offer 5v5 battles, high-quality graphics, and an array of unique heroes. Essentially Shadowgun War Games is positioned to be mobile's answer to Overwatch, which is probably why the title has already racked up over 1 million pre-registrations over the last three months.

The latest title in the studio’s hit Shadowgun series is almost with us!

BRNO, Czech Republic – JANUARY 28, 2020 – Following the success of the game’s pre-registration period which secured the interest of more than 1 million players, MADFINGER Games has today revealed that their upcoming team-based tactical shooter Shadowgun War Games will be available on the App Store and the Google Play Store beginning February 12.

Made with Unity, Shadowgun War Games will offer 5v5 battles, incredible graphics, and a gallery of heroes to choose from with unique personalities and gameplay styles. MADFINGER Games has previously won awards for their boundary pushing visuals on mobile, including Google Play’s ‘Most Beautiful Mobile Game of 2019’ for Shadowgun Legends.

“I’m pleased to announce that Shadowgun War Games is almost here,” said Marek Rabas, CEO of MADFINGER Games. “Feedback for Closed Beta has been excellent and we’re now making the final tweaks. The hype is real and we believe War Games will become one of the top games of 2020.”

Shadowgun War Games is currently in closed beta, and will be available to all players beginning February 12. To pre-register for the public launch, visit shadowgunwargames.com/preregister/now.

MADFINGER Games is a world-class independent game developer with a focus on mobile and console platforms. Founded in 2010, their games quickly shot to the top of the charts in sales and hit the #1 spot in over 100 countries. MADFINGER Games is renowned for stunning visuals and outstanding gameplay experiences, which have received worldwide acclaim and a series of prestigious awards, including Google Play’s “Most Beautiful Mobile Game 2019”. The studio’s most popular titles are Shadowgun Legends, Unkilled, and Dead Trigger 2, and their games have been downloaded over 250 million times.