Following all the previous rumors renders and confirmed specs for the Galaxy Z Flip have just been published, courtesy of @rquandt and WinFuture. This gives us the clearest glimpse of the upcoming folding phone that we've seen yet, showing off the phone's front design, hinge, tiny clamshell-mounted display, and side-mounted fingerprint sensor in surprising detail, and illuminating its interior with a full spec sheet.

If you haven't already followed the news regarding the Galaxy Z Flip, this is anticipated to be Samsung's first clamshell/Moto Razr-style folding device, following the Galaxy Fold. (See: hamburger fold, rather than hot dog.) The company has been teasing the idea since back in October, and we've been hearing details about it since December when we thought it might end up being called the "Galaxy Fold 2." 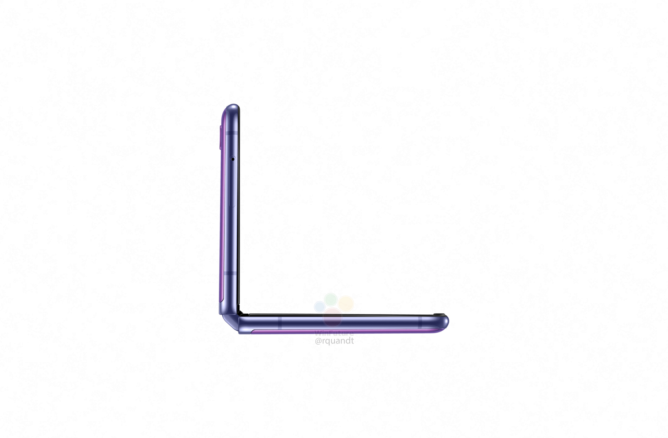 In addition to confirming details surrounding the side-mounted fingerprint sensor, the renders show a hinge similar to the original Galaxy Fold's updated design — notably without the gap between the hinge and the screen itself that led to damaged displays in its first incarnation. The tiny, outward-facing OLED display rumored to be included is also clearly visible in the renders, opposite the camera on the top of the phone. It's a wide rectangle, previously claimed to be an inch corner-to-corner, with rounded edges and a 300x116 resolution. It's set beneath the Gorilla Glass back of the phone and is anticipated to support always-on use for things like displaying the time and notifications.

The folding display was previously rumored to be made of "Ultra Thin Glass," which WinFuture is able to confirm.  Right now, a development like that would represent a fundamental advancement in materials science — meaning I'll believe it when I see it. Either way, it's expected to be more durable than the plastic film on the Galaxy Fold. 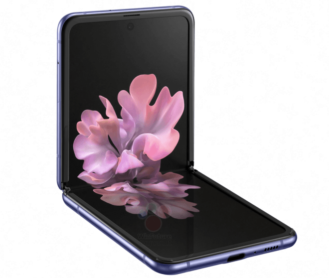 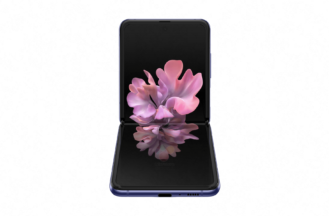 These renders do also tweak a few of the rumored specs. The "hole-punch" display will be a bit taller than previously expected, with a 22:9 aspect ratio and a 1080p-equivalent (2636x1080) resolution and 6.7" in size. Other details likely remain unchanged, including the anticipated Snapdragon 855+ chipset, 8GB of RAM, 256GB of storage, a 12MP primary camera supplemented by a 12MP wide-angle, and a two-cell 3,300 mAh battery capacity. No 5G support appears to be planned, either.

Full specs supplied by WinFuture are just below:

Galaxy Z Flip might have a name out of the 1990s, but on paper, it looks set to handily trounce the physically similar Motorola Razr, which offers lackluster specs in comparison — a bit funny, considering even the Galaxy Z Flip feels a bit "last year" with an older Snapdragon 855+ powering it.

With so many details known, I wouldn't be surprised if we heard more about the Galazy Z Flip at Samsung's upcoming Unpacked event ahead of Max Weinbach's prognosticated February 14th launch date, where it's expected to be an AT&T exclusive running $1,400.