Precise technical details aren't known outside the obvious IMX 686 teaser, which could point to some powerful camera chops if it's paired with the right processing. Possible chipsets in the phone could range from the upcoming Snapdragon 865 to the Snapdragon 765/G. Whatever SoC is inside it, apparently the phone requires a heat pipe to stay cool, which isn't as rare of a practice these days as Poco's teaser would imply.

The last "Juiced Up" line, paired with a view from the bottom of a phone (which appears to have a headphone jack) implies it should have some sort of fast-charging technology — also not uncommon these days, but a major marketing point if one wants to compete with OnePlus, as Poco clearly does. 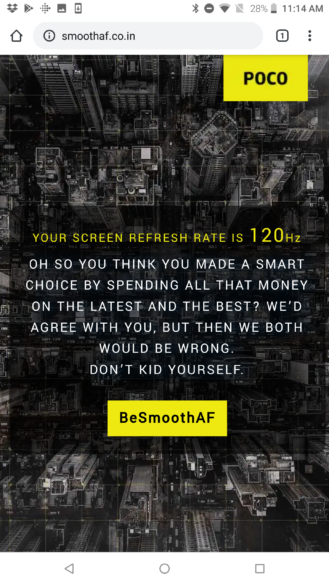 A separate "SmoothAF" site by Poco loads a frame rate test on mobile devices that admonishes even 90Hz displays but backhandedly-compliments a 120Hz experience, claiming you "spent all that money" to get it, which strongly implies that the Poco X2 will feature a 120Hz display.

We're just over a week out, at the time of writing, from the date advertised at the site, but details regarding the phone are still sparse. That lack of leaks could indicate that it may not be available for some time after its "launch," or the newly-independent Poco has kept the phone a secret better than most smartphone manufacturers can accomplish these days.