Chrome apps are almost dead, but the idea of apps via PWAs (Progressive Web Apps) lives on. Google Drive is the latest Google service to pick up a PWA, following YouTube Music and Google Photos on its trip through the future. It's not a game-changing experience, but it can make interacting with your cloud-stored files in Drive feel a little bit more native, and it offers Drive users an app-like option now that the era of Chrome Apps is just about over.

The option to install Google Drive as a PWA (also available in the three-dot menu below).

The next time you navigate to the Google Drive site on a supported browser, you'll see the option to install Drive as a PWA. On Chrome, that means a plus sign in a circle up near the end of the address bar, or an "Install Google Drive" option that appears in Chrome's main menu. The same options will also appear on a Chromebook in the same spots. 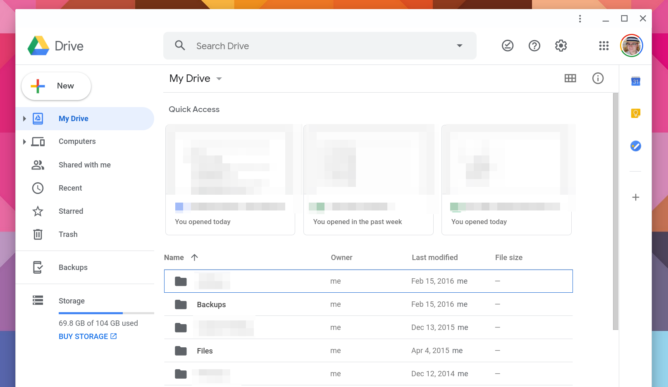 On Chromebooks and desktop, this PWA basically gives you a shortcut directly to Google Drive in its own window — no address bar, tabs, or anything else in the way. It's meant to look like a native experience, even though it's basically just Drive in Chrome, like you're used to. Opening items in Drive pushes you to a new, separate browser tab in another window if it requires an editor, so you don't get to do everything from inside the PWA. Opening a text document via Google Docs on a Chromebook in the Drive PWA, for example, takes you from the PWA to a new tab in Chrome, though you can preview items like PDFs and videos through the PWA.

The full Google Drive Android app (left) is probably a better choice than the new PWA on mobile (right).

The PWA also works on Android (via the three-dot menu -> Add to Home screen), but there isn't as much of a benefit to it there; the Android app itself is a much better experience than the Drive mobile site in a standalone window. By default, it tries to open most of your stuff in Drive via the Sheets/Docs/Slides apps anyway.

Interested parties can check out the new Google Drive PWA right now, just navigate over to drive.google.com and, if you're on Chrome or a Chromebook, check your address bar for the shortcut.

Google finally lets you share and collaborate on bookmarks, hides the feature somewhere you ...

Save a tidy sum on Eufy robot vacuums with Amazon's latest Deal of the Day (up to $130 off with ...