There is currently one confirmed report of Android 10 rolling out to an LG G8 ThinQ in South Korea, courtesy of Reddit user Jerry101923. They posted the update confirmation on Reddit, then shared additional screenshots with GSMArena.

We weren't able to find any additional reports on social media, so the rollout seems to be extremely limited for now. If previous upgrades are anything to go by, those of you outside the Korean Peninsula will be waiting several more months to get Android 10—while the G7 got Pie in January of 2019, models in other countries didn't get it until July.

Late last year we started getting our first reports of LG's Android 10 update for the G8 becoming available in Asia. While that was a start, we were immediately anxious to find out when the software might make its way around the globe. It took another or month or so for updates to start hitting G8s in the US, but we're finally starting to see some progress, carrier by carrier.

It looks like Sprint got things underway, and user reports of Android 10 updates started surfacing a couple weeks back. While that one flew by a little under the radar, yesterday we got our next bit of progress, with Verizon announcing the release of the G8's Android 10 update for its users. 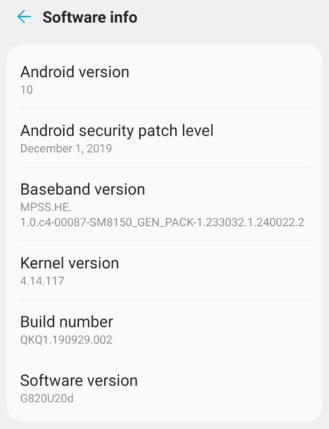 Hopefully we'll see AT&T and T-Mobile follow along over the course of the next few days.