I'll be the first to admit that I am terrible at closing Chrome tabs on my phone, constantly filling them with things that I can't get to at the moment, but also don't deserve a new bookmark. Because of my poor tab management, I'm regularly greeted by a smiling emoticon in place of any indicator of my current number of open tabs. Thankfully, Chrome for Android appears to be testing a new feature, by way of a new flag, that will periodically suggest users clean out their old, unused tabs.

This feature has been in the works since at least last August when a commit log first mentioned efforts "to assist the user in closing stale/unused tabs." As with many Chrome features during the early testing stage, this one is locked behind a Chrome flag titled "Suggest to close Tabs" (found at this URL: chrome://flags/#enable-close-tab-suggestions) if you're running the latest stable build (79) of the browser. For those who prefer to live on the cutting edge, Chrome Canary has the feature enabled by default. 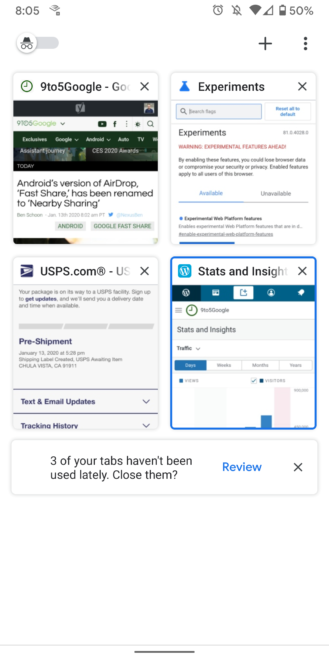 Once enabled, recommendations will begin to appear within the tab switcher, asking if you'd like to close any tabs that Chrome determines to be "stale" after an as-of-yet undetermined amount of time. You'll still need to approve any of the automated suggestions manually, so there's no need to worry about losing important tabs. Considering that this feature is still in the testing stages, there isn't much further information available regarding when to expect an official launch.

Xbox Console Streaming lets you play any Xbox One game on your Android device (Update: Global ...