If you're playing music or a video in a Chrome tab you're not looking at and want to pause it, it's a bit of a hassle: you have to navigate to that tab, press the button, then drudge back to the previous tab. The whole process probably only takes a couple of seconds, but an upcoming change will make it easier. Chrome Canary now has a flag to enable "global media controls" in the toolbar.

To enable to controls, head to chrome://flags/#global-media-controls. After a browser restart, you'll see a play button in your toolbar next to the extensions whenever you have media playing in Chrome. Clicking it will show the title of what's playing, where it's playing from, and provide play/pause and skip buttons.

It's a minor addition, sure, but a change that shaves a moment off your routine here and there can add up to a considerably smoother experience. Here's hoping the flag makes its way to more stable versions of Chrome soon.

Google officially announced the new media playback hub in a post on the Chromium blog today, and it looks basically like what we saw in the Canary build above, if a bit more polished. 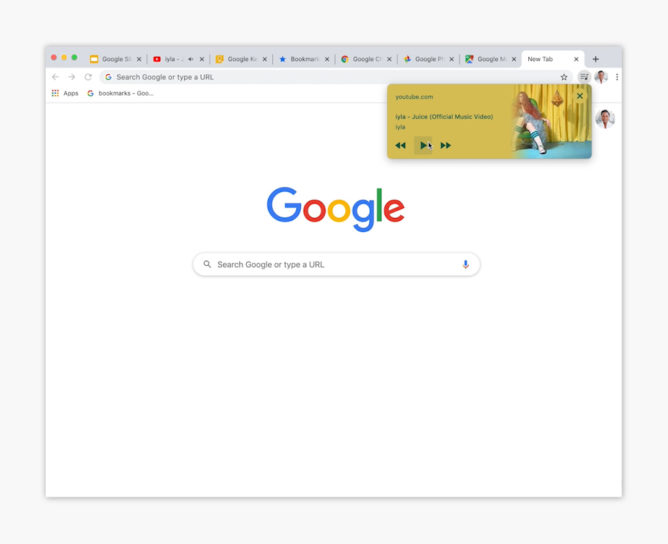 There's even album art and color coordinated backgrounds! The button also changed from a 'play' symbol to a note on a line of sheet music, though I'm not sure that's any more intuitive. Still, a handy change in Chrome.

If you're running Chrome 79 on Windows, Mac, or Linux, you've got this now.

It seems that the feature didn't really roll out last month when Google announced it — even the Chromium post was removed. However, the company is now back saying this media playback hub is officially available on Chrome on Windows, Mac, and Linux. I verified this on my Mac and it sure is there. When one of your tabs is playing music, look for the playlist icon next to your Chrome profile avatar on the top right.

Poco is now an independent brand under Xiaomi