When the TicPods Free came out in 2018, they were one of my favorite true wireless sets, especially given the relatively low price of $130. Cheaper models were few and far between at that point, and you’d have to pay significantly more to get anything that sounded truly excellent. The market has been flooded with half-decent affordable options in the time since then, however, and the original TicPods didn’t stand up to the test of time all that well.

I've been looking forward to an update, and now the TicPods 2 and TicPods 2 Pro are upon us, the latter of which I’ve been reviewing over the past week or so. The two variants are mostly identical, but the Pro model uses a slightly more powerful chipset to enable additional AI features. Both versions offer several meaningful improvements over the first-generation, but the decision to go with AirPods style hard tips will irk some prospective buyers. 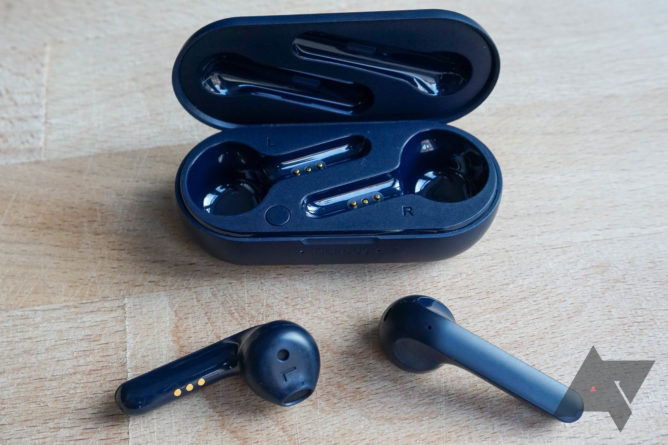 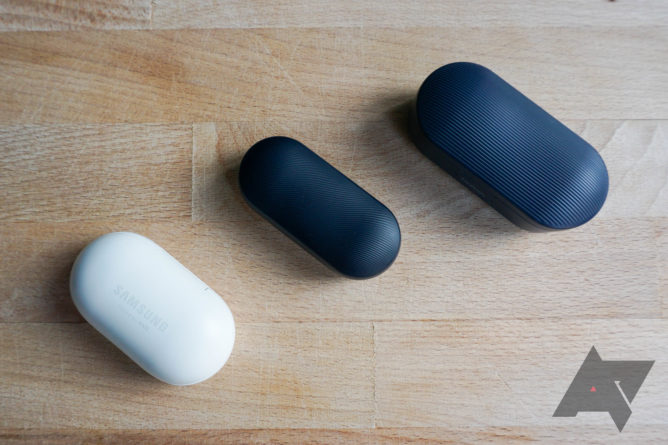 The case is tiny compared to the original TicPods Free (right) and even the Samsung Galaxy Buds (left).

The TicPods 2 aesthetic is an evolution of what we saw with the TicPods Free, with a very similar design for both the earbuds and case, at least at first glance. Mobvoi says that the case is 42% smaller, and it’s honestly quite remarkable how much has been shaved off. I’ve seen a lot of true wireless earbud cases, but this is by far the most compact, fitting easily into even the coin pocket in my jeans. The earbuds themselves are also smaller, and they now don’t have the textured lines running down their stems. The most contentious design decision is the move to hard ear tips instead of swappable silicone ones. Because of this, you can’t customize the fit in any way and they’re much less comfortable to wear for long periods of time (in my ears, anyway). Noise-isolation is also non-existent, obviously. Mobvoi says its users didn’t like the fit of the TicPods Free and that these will be more comfortable, but it’s surely a move to go after AirPods customers — they mustn’t have predicted that Apple would release a Pro model with soft tips. The earbuds are very light, at least, and they actually feel quite secure despite not being especially comfortable. Your mileage may vary. 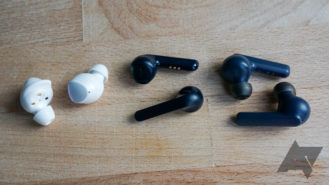 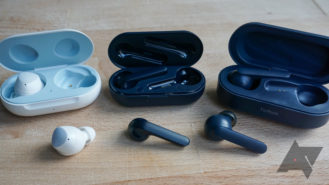 The case hasn’t only been enhanced by its reduction in size — it also sports a USB-C port and can fast charge the earbuds to give you an hour of playback from a 5-minute in top-up. Although there are two indicator LEDs on the case, they don’t relate to either earbud, only the battey level of the case itself. A function button inside the case that allows you to pair to a new device easily.

One curious regression is that the buds are now only IPX4 rated (the last ones were IPX5) although they’re still sweat/rain-proof so you can take them out for a run. It took me a while to get used to the controls on the first TicPods, but I have to say they’re among my favorites now in that respect, and not just because they’re called “Tickle Touch.” Few competing products offer on-bud volume controls like these do (with a swipe up or down the stem), and double-tap to pause or long-press for Google Assistant both work well. 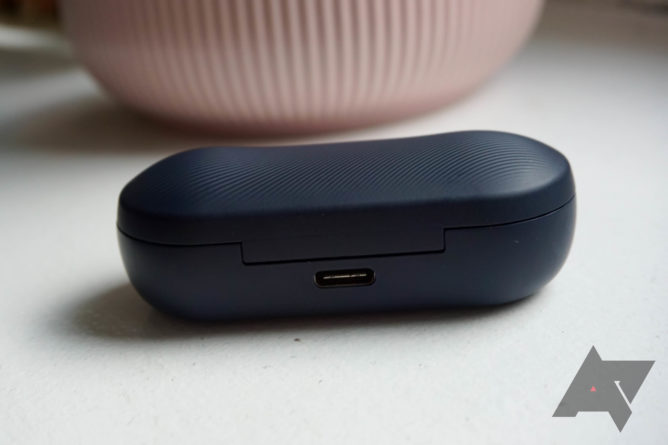 It’s worth mentioning that overall build quality is as you’d expect for the price point. It’s all plastic, but it feels nice and everything is put together well. I prefer the darker navy blue used for the set I’m testing, but there are also white and pink options to choose from. Nearer Valentine’s Day, a red colorway will also go on sale. In the box, the only extras are a short USB Type A-to-C cable and an instruction manual.

Audio quality has improved with the TicPods 2, if not dramatically. The output from the 13mm driver is much cleaner this time, with crisp highs and pleasant-enough mids. Bass certainly suffers for the lack of noise isolation, but there’s an equalizer in the app that does an okay job of making up for that. AptX, AAC, and SBC codecs are all supported, and audiovisual latency was minimal to non-existent. Call quality is marginally better, apparently due to dual-mic noise cancellation (Pro model only), although it’s still an issue if you’re outside on a busy city street. The total battery life for the earbuds plus case has increased from 18 to 20 hours (23 hours for the non-Pro version), and while this isn’t anywhere near class-leading, I’ll remind you once again that the case is ridiculously tiny. I was able to just about eke out the four hours of promised playback on a single charge with varied listening, and it’s rare I ever want to use earbuds for longer than that anyway. Connectivity has been very stable (Bluetooth 5.0), and the left earbud is the master which means it can be used by itself while the other is in back in its box. 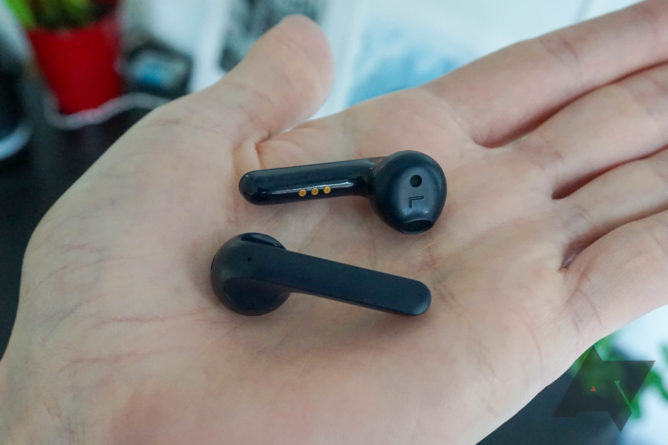 A key area of differentiation between the two models is the processor that powers them. In the TicPods 2 Pro, it’s the QCC5121, while the cheaper pair uses the QCC3026, both by Qualcomm. The reason being that the Pro set offers additional AI features, although I’m not sure they’re all worth having. TicHear has two aspects, the first of which is indeed very useful — instead of long-pressing the touch panel to activate the Google Assistant you cant use the custom wake word “Hey Tico.” It’s sometimes a little slow to get started, but it works every time. Then there are Quick Commands which are supposed to enable wake word-less control through phrases such as “Pause music,” “Next track,” and “Pick up.” Unfortunately, I’ve found that these only come off something like one in every 10 attempts, and even then you have to shout way too loud to make it happen. That's with testing in a quiet room, too, so chances are even slimmer when you’re out and about. TicMotion is another AI capability that allows you to nod your head twice to answer a call or shake it to dismiss. Both gestures succeed more often than not, but you do have to make your movements very pronounced, so it’s not the type of thing you’ll want to do in public.

The app isn't pretty, but it mostly works.

The Mobvoi app could use some love in the design department, but its equalizer gives you some effective sound profile options and you can also customize the double-tap control or turn off the setting that stops playback when you take an earbud out (which works very well, by the way). There’s also a translation feature similar to that offered by Google’s ill-fated Pixel Buds, but it’s slow and buggy at present, constantly telling me that I have a poor internet connection even when connected to super-fast WiFi. Hopefully, Mobvoi will iron these kinks out over time.

Sure, if you don’t mind hard tips. Aside from the questionable AI functionality, there’s a lot to like about the TicPods 2 Pro. The fit isn't for me, but for those who like AirPods-style hard ear tips, these are a compelling cheaper alternative. Since call quality isn’t outstanding even with the dual-mic noise cancellation, and only the “Hey Tico” wake word of the AI features is truly useful, I’d be inclined to recommend getting the TicPods 2 model that doesn’t have these so you can save a bit of money. Either way, both sets of earbuds represent a worthy upgrade over the first-generation earbuds from Mobvoi. 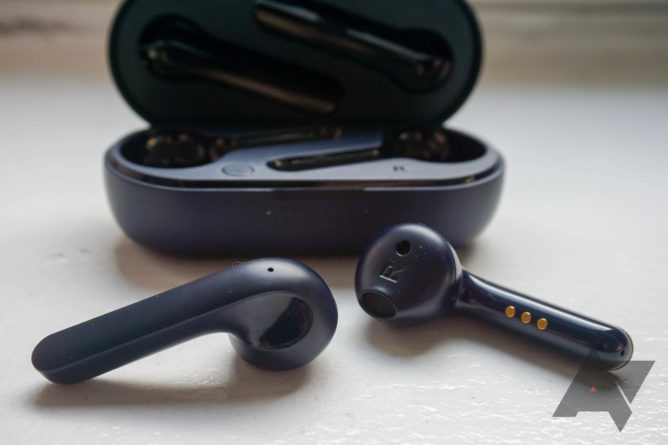 Order between now and the middle of February to receive 10% off the Pro models.

You can now enroll in Google's Advanced Protection Program using just your phone, no backup key ...