Google introduced Live Caption, a feature that added locally-generated captions to all video and audio content on your phone, earlier this year with the Pixel 4. The functionality was later backported to the Pixel 3 series (including the budget 3a), and now Google has gone a bit further by bringing Live Caption to the 2 year-old Pixel 2.

Reddit user yashredy originally made the discovery after manually installing the latest Device Personalization Services APK, which causes the Live Caption settings to appear on the Pixel 2 and 2 XL. A few other Pixel 2 owners have chimed in with confirmations. The folks over at XDA Developers originally got it working on a Pixel 2 before the Pixel 4 was even revealed, so there wasn't any doubt the phone was capable of running it, but now there are no hacks required. 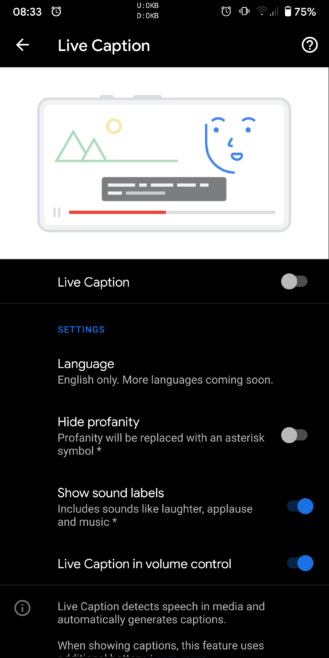 Live Caption on the Pixel 2 XL (thanks Armando!)

It's nice to see the Pixel 2 continue to receive some of Google's newer software features, outside of the usual system updates and security fixes. However, it is interesting that the company didn't make an announcement for the update — though that could be coming once the rollout is complete.

If you want to enable it on your own Pixel 2, and you're not patient enough to wait for the server-side rollout, you can download the required Personalization Services version from APKMirror.