Samsung surprised quite a few of us with the Galaxy Buds that launched at the same time as the Galaxy S10 smartphone lineup — not only were they affordable but they sounded pretty decent too (as I detailed in my review). Details about a follow up are now starting to emerge, and it sounds like they'll come with in-vogue active noise cancellation tech.

Rumored to arrive alongside the Galaxy S11 in the first quarter of 2020, they'll simply be called Galaxy Buds+, according to serial leaker Evan Blass. That suggests they'll be something of an iterative upgrade. They might not look too different from their predecessor, but we can expect some new internals to make them worth buying, with ANC a popular inclusion on recent competing models.

SamMobile has reason to believe the model number is SM-R175 and also thinks noise cancellation is a safe bet. Onboard storage could also return — with the Gear IconX, you could upload 4GB of music so you could take them on a run without your phone. Other specs are likely to stay the same, as well as color options such as black, white, silver, and yellow.

The original model was bundled with S10 series phones, and we'll probably see the same type of thing when the S11 drops in February/March next year. If they include ANC, a price hike will surely follow, so that'll make it an even more attractive freebie than before. For $130, the first-gen Galaxy Buds represented great value even as a separate purchase. If the MSRP remains reasonable, they should provide healthy competition for Apple's AirPods Pro and other ANC-equipped true wireless earbuds.

They could be coming even sooner

It looks like Samsung might not wait until the Galaxy S11 launch next year after all. As reported by SamMobile, support pages for the Galaxy Buds+ (in Korean) have already gone live, suggesting a more imminent release for the new earbuds. It's possible they just got a little excited and posted them too early, though, so we'll have to wait for more concrete evidence before we can be sure. 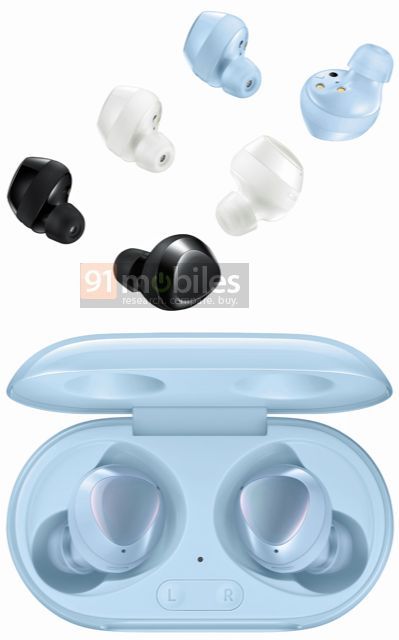 Official-looking renders obtained by 91Mobiles of the next-generation Samsung Galaxy Buds+ show that while the design is largely unchanged from the current model, there will at least be a spiffy new blue color option to choose from. The image above backs up earlier video evidence gathered by XDA Developers from the Samsung SmartThings app (below) that shows a product that could just as easily be the first-generation Galaxy Buds.

The new true wireless earbuds from Samsung have shown up at the FCC and got their Bluetooth certification, so we know the launch is imminent. Whether we'll have to wait until the Samsung Galaxy S11 (or S20, if rumors are to be believed) event to get an official announcement is one of the few questions left unanswered.

No ANC after all

A new report from SamMobile says the Galaxy Buds+ won't have active noise cancellation as previous reports speculated. That will put Samsung at a disadvantage compared to Apple's AirPods Pro, which do have ANC. The earbuds should have better sound quality, and the addition of more microphones will make phone calls clearer. SamMobile notes that battery life will be the primary improvement this time. The Galaxy Buds+ will have 85mAh batteries in each bud, compared to 58mAh in the current model. That should be enough for 12 hours of use per charge.

Beware: Joining Google's Advanced Protection could stop your Home speakers from recognizing you