One of the great things about Android is that instead of being dependent on major OS upgrades like that other mobile operating system, Google's core apps receive regular updates throughout the year. While this is usually a highlight of the platform, it's not uncommon for features to be altered or randomly disappear without warning. Case in point: A number of reports are claiming that the Play Store notification that should be received when an app successfully updates is no longer appearing in the notification shade.

Users first noticed the missing notifications in early November, shortly after Play Store version 17.4 went live. Since then, more accounts have surfaced along Reddit and OnePlus' forum to share the same notification struggles. Several members of our team have tested these claims and confirmed that our update notifications are also missing on Google Play Store version 17.6.19. As you can see in the GIF below, when tapping the "update" button on Google Fi, the Play Store signals that the app is being updated, but after that has finished, there is no final notification to confirm that the update has been finalized.

In addition to successful update notifications being a no-show, some users on Google Support forums, Reddit and Android Central Forums who employ the manual update method have reported a similar issue where apps that need to be updated never prompt the user via a notification to do so, lending credence to the theory that this issue is most likely a notification bug and not a feature. We've reached out to Google for comment, and we'll update this story as soon as we have a response.

The issue seems to be fixed now. Users have reported that after updating a couple of apps, a notification surfaced telling them many more apps have been updated — likely catching up to the backlog of missed notifications. From now onward, things should go back to normal. Thanks, Nick, Armando, Moshe! 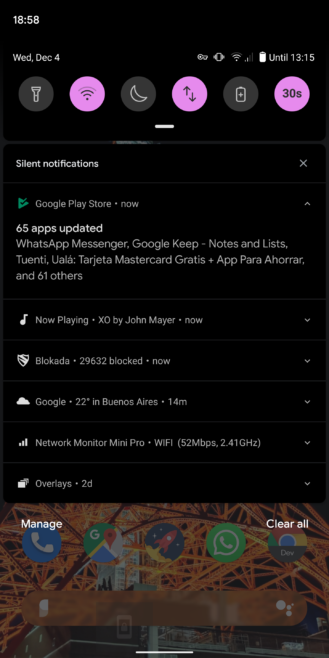 Several of our tipsters, as well as users within the Reddit threads linked below, are reporting that the Play Store is once again not showing notifications for updated apps. This bug re-emerged sometime around mid-December, though it may be slightly older than that. We'll update our coverage as soon as Google releases another fix that will hopefully put this glitch to bed for good. Thanks, Ibrahim and Eduardo!

Following our most recent update, a Google spokesperson reached out to provide further clarification on this developing story. As it turns out, absent Play Store notifications for updated apps is an intended feature, not a bug.