9to5Google and XDA-Developers have unwrapped the new applet, screenshot by screenshot. Fast Share is essentially the sharing function found in the Files by Google app where users assign themselves a special device name for the purposes of using Fast Share, then scan for surrounding devices with Bluetooth before finally conducting the information transfer through Wi-Fi Direct. 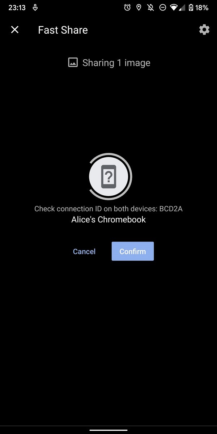 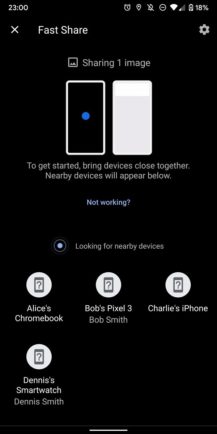 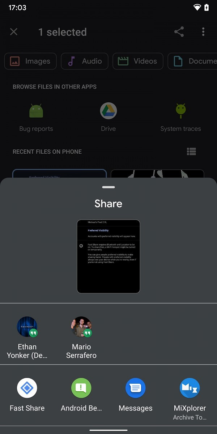 The feature is denoted by the icon for the existing "Nearby" feature, which indicates local points of interest from Bluetooth beacons. Fast Share apparently has a dark theme, as depicted by the screenshots above, and looks to be running in a demo mode. Several preset "nearby devices" include a Chromebook, a Pixel 3, an iPhone, and a "smartwatch." Of course, by resorting to the same standard wireless relationships that Apple's own AirDrop does, moving files across devices of different platforms becomes a possibility — though with this being an unreleased service, it's wise not to assume what will go public. 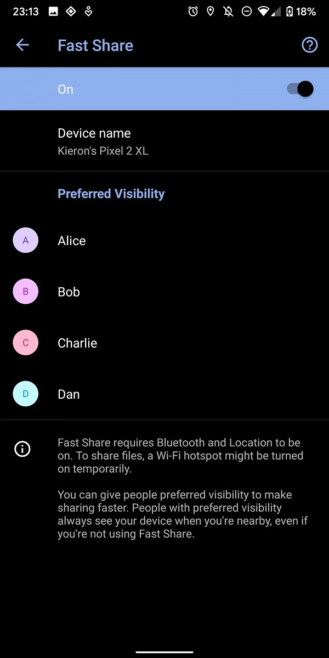 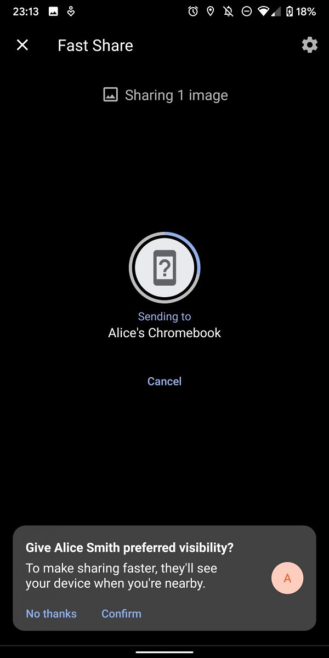 On the other hand, you're going to face the same problems of anonymity that have led to perverts dropping pics to unsuspecting passengers on the train. There is a "Preferred Visibility" designation you can give to devices you frequently connect with. Then again, one of the big reasons why people miss Android Beam — and, for that matter, Samsung's S Beam, which utilized Wi-Fi Direct instead of Bluetooth for data transfer — is because of the certainty that a device tapping another device and initiating contact through NFC provides. No risk of device name spoofing, no random visual assaults, none of that.

There's no telling if and when Fast Share will come to fruition and, with it being a Play service feature, what versions of Android it will come to. That said, the awkward nature of having to physically clap together phones did inhibit a lot of people from using Beam, so... swings and roundabouts, right?

XDA poked around in a more recent build of Google Play Services and found that this feature has been renamed "Nearby Sharing." It also appears that devices have to be placed within about a foot of each other for the function to be available, according to their investigation, so the new name makes sense.