For the longest time now, you've been able to leave reviews on apps and games' listings on the Play Store. Whether you want to complain about a bug or a recent update, give feedback to the developer, praise them for their work, it's a great way to voice your opinion and help others get a clear image of the app's experience. However, leaving reviews is a disruptive process, and finding or editing your existing reviews is still very difficult as there's no centralized place for them. Google is testing solutions for these problems.

Plenty of apps already prompt you to leave a review for them every now and then, but leaving that review is a disruptive process that leaves the app and takes you to the Play Store. We knew Google has been working on an in-app review dialog that loads everything smoothly, the same way an in-app purchase window shows up. Now, this dialog option is appearing for some users.

To see whether you have this feature, you need to try an app that asks you for a review using the proper API. IAR Test App is a good example (credit for finding it go to @MishaalRahman and 9to5Google). If you don't have the feature, tapping the Request then Launch options just results in an error message. If you do, you'll see the new bottom-placed prompt for review, complete with a star rating picker and an optional text field to write your thoughts.

In-app review dialog on both a Pixel and a Samsung Galaxy device.

The feature is still in testing though and doesn't show up for everyone. Even with the app linked above, the first instance may work on some devices, while the next ones could result in an error. It's clear that Google is working on this, though, and we may soon see it spread across apps and devices.

Under the My apps & games section of the Play Store, in the Installed tab, a new Reviews division is being tested. Tapping it shows two tabs: Unreviewed and Posted.

As the names suggest, the first one has a list of apps you haven't reviewed yet with an easy way to assign them a star rating and write your full thoughts, while the second one shows all your published reviews and star ratings and makes it easy to edit those that are no longer relevant.

However, the feature is still quirky. Although you get to it from your installed apps list and not your full library, it still shows apps you no longer have on your phone. Our tipster tells us the Posted tab contains all reviews he published, and the Unreviewed tab has a few removed apps too. It doesn't seem like all uninstalled apps show up in the latter, which is a relief: If I were to see my entire Play Store library there, I'm sure it'd be completely useless for me. Another confusing aspect is the ordering of unreviewed apps; we can't tell how they're sorted and based on which criteria.

It actually makes sense to see all (or at least recently tried) apps in these lists, even if they were uninstalled. That helps give feedback to a developer if you removed a malfunctioning app. But for things to be logical, the reviews section should be reached from the full Library or a separate new tab. There should also be clear ordering and sorting methods.

Another minor change we spotted in the Play Store is a new header image behind the account picker. After Google+'s demise, Google assigned a default image to everyone there (the background used to be the same you set up from the social network). It's switching things around now with a crystallized pattern reminiscent of the Play Store logo, albeit with darker and less vibrant colors. 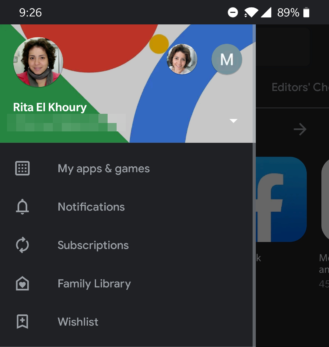 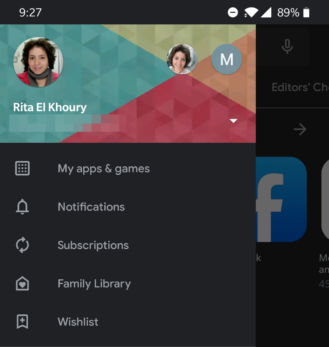 This new header briefly showed up yesterday, then disappeared today — even a minor image is part of a server-side test.

Reviews section now rolling out for many, other features not live yet

The reviews section inside My apps and games -> Installed appears to be live for many users now. I have it on my phones and so do several of our tipsters. Nothing has functionally changed since we covered it in October though. The inconsistencies we highlighted are still there, but at least we finally have an easy way to see all our posted reviews and to write new ones. Some sorting and filtering methods would be quite welcome to help with the current messy list. Thanks Alice, Kiran, and @imRishabhBaid!

As for the in-app review dialog, it's still not official or rolled out yet. The crystallized header image never showed up again, but it will be completely irrelevant once the Play Store moves to the new account switcher.

All the new Wear OS watches from CES 2020