There's been little good news for HTC recently as the Taiwanese company continues its downward revenue trajectory with no hopes of skidding in the short term.

Another bit of bad news came about today as users have had intermittent trouble accessing the company's website.

Trying to do my monthly log-in to #HTCelevate and https://t.co/yEiY41hZ7q isn’t loading for me at all across several browsers. Others seeing the same issue? 🤔 pic.twitter.com/CBuA68gvv8

Some logins did work for certain people — a few have been able to claim unfettered access to the site — but the "Http/1.1 Service Unavailable" error has popped up on most attempts to access anything upon the HTC top-level domain. No, messing around with HTTP and HTTPS does not produce consistent results.

Fans who still participate in the Elevate community loyalty program were trying to access its portal page and were left with a 502 error, indicating that the company may have tossed in the towel on those servers.

Here is the end of an era pic.twitter.com/YmKIbHOqgo

Amid the downtime and confusion, a bit of mourning from those who went to meet-ups with HTC executives and other cohorts in dingy bars and rooftaps and got bits of swag every so often.

The issue is ongoing and we have not heard from HTC on its official channels about it. We've contacted the company to see if we can confirm the end of the Elevate program and will update this story if we hear back.

Everything is back online

The 1.1 errors seem to have calmed down on most entries to HTC's site if not all of them. The Elevate forums are also back online. HTC did not respond to our request for comment.

HTC's Elevate site and community appear to have been shut down. Visiting the site now shows a notice that says "the program is no longer active." Thanks, Jeffrey! 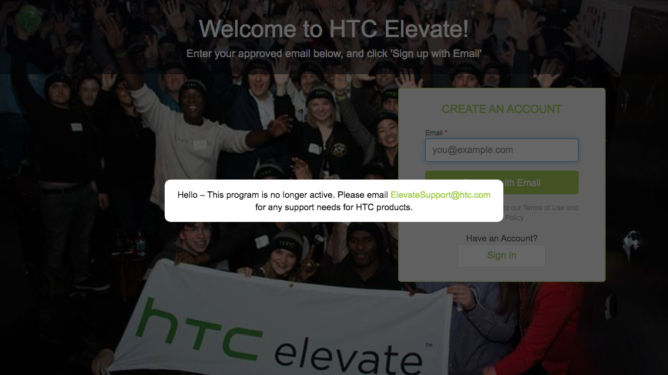 Every product with Amazon Alexa announced at CES 2020