Chrome OS is evolving and changing faster than any other operating system. In recent years, Google has been bringing it closer to Android, hoping to offer a more unified experience across multiple form factors. In Chrome OS 80, which went into the Beta channel today, two more Android features are brought forward: Gesture navigation and multiple quick settings pages.

As you can see in the video above, things are similar to Android 10: Swiping up from the bottom will take you home, dragging up and holding will open the overview screen, and swiping from the side will go back. There are some differences, though, with the back gesture only working on the left edge of the display.

An additional gesture is present to show the app dock — just swipe up quickly and only a short distance from the bottom of the screen. If this sounds messy, it isn't, and within a few minutes it'll be second nature. If you've used an iPad with Apple's gesture system, you'll feel right at home.

For the moment, at least, pulling down from the top of the display to go home still works, but it's unclear if that will be the case going forward.

The gestures are smooth and pleasant to use though I doubt you'll be enabling them permanently in their current state: Some apps, both Android and web-based, freak out when you try to use them. The most prominent example of this is the Play Store or any other app with a slide-out menu (also depicted in the video above). Pulling from the left edge will bring out the menu and trigger the back gesture. Except that the back gesture won't do anything, and instead, the floating arrow will fly in as the navigation menu opens. 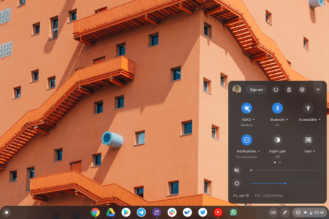 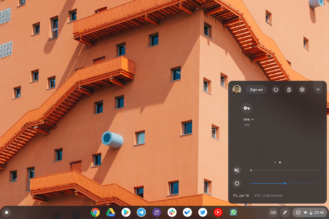 Chrome OS 80 also adds multiple quick settings pages, again following in the footsteps of Android. Unlike Android, you can't change the order of the tiles or add custom ones. Both of these new additions to Chrome OS are works in progress, and there's plenty of time before we see either roll out to the public. By then, Google should have finessed and refined everything to make it presentable.