YouTube Music received quite a few improvements during 2019, but it may not have been obvious since many of updates have been fairly subtle or only relevant to small audiences. Let's be honest, most of it is easy to ignore when some big features are still missing. Regardless, the service and app maturing, and that will be important when Google Play Music eventually fades into the aether and YouTube Music is all that remains. With the latest update, preparations are being made to improve the Library tab so it's easier to use and doesn't get in the way of playing music the way you want.

Revisions to the Library tab

If you poke through the Library tab today, you might consider it serviceable, but that's about it. The top third is dedicated to a carousel of recently played mixes, artists, and songs. Below that are a handful of links, including: Downloads, Playlists, Albums, Songs, and Artists.

As you would expect, the Downloads page provides management of the Offline Mixtape and any manually downloaded music, and the Playlists page is useful for deleting or managing playlists. Both probably deserve improvement, but they make sense and work fine. 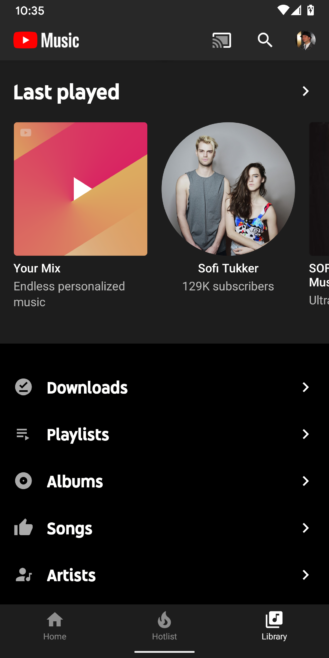 Where things get messy are the other three pages for Albums, Songs, and Artists. Each of these is populated by different means — albums appear in their page only after adding them to your library through the overflow menu, songs join the list if you've hit the Like button on them, and artists show up after subscribing to their YouTube channels.

A list of liked songs is handy by itself, but the division of these groups leads to pointless situations. For example, the Songs list won't get anything from your favorite albums unless those individual tracks are also liked. Likewise, new songs and albums from artists you've subscribed to will never appear in the other two pages if you aren't manually checking in on their content. These strict divisions ultimately make music management a chore.

It seems at least some of this is about to change. New text in the app suggests albums and songs will be coming together in a single screen, likely still named Songs. It's not a huge change, but it can simplify a previously overcomplicated and potentially confusing step.

Things will be changing for the Artists page, as well. For starters, the current list will still exist, but it's moving to a new page actually called Subscriptions. The upcoming version of the Artists page will show a list of albums and songs that contain artists that are prevalent in your library. It's hard to say if this will be much more useful, especially for people that have liked a huge collection of songs from an assortment of artists; but at least it sounds like a good experiment.

These are the changes clearly mentioned in the new text, but not necessarily the only things planned. Adjustments to the Library tab may be in preparation for some of the other long-awaited features. While there's nothing yet to confirm Play Music's user-uploaded songs support will appear in YouTube Music, it's still widely expected. Likewise, YouTube Music app quietly updated to support playback of locally stored audio, but explicitly precluded tracks streamed from YouTube Music and local audio to appear in the same playlists or even the player queue. If this restriction will be lifted, this seems like a good time for it.

In the meantime, we'll keep an eye out in case the reorganized Library tab launches before the next update.

Pixel 4 face unlock is broken for some, may be caused by recent patches