If you're looking for an all-in-one smart home device, the  Ecobee Switch+ is the one you need. It's a smart switch that comes with Alexa and houses different sensors. It was initially priced at $80, but you can now get it for just $40, which is half the original MSRP. 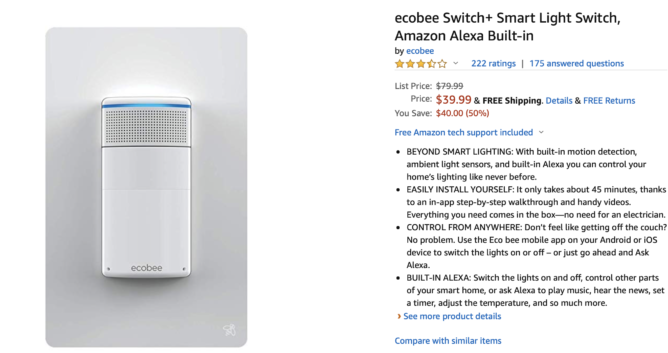 The device is designed as a wall switch replacement, with a bunch of extra features. It can replace an Echo Dot, as it has Alexa built-in. It also packs motion, brightness, and temperature sensors, allowing it to automatically turn the lights on when someone walks into a room or when it's dark. It's also compatible with IFTTT, HomeKit, and SmartThings, allowing it to interact with other devices based on your needs. For example, you can use its temperature sensor to control your smart thermostat. There's also a built-in night light, helping you find your way around the house when it's dark.

The Switch+ can be installed in about 45 minutes and doesn't require any technical skills. If you're planning on buying one, you should know some users have complained about its performance and mentioned it doesn't fully replace an actual Echo. With that in mind, it's still an interesting purchase, especially when it's half the original price.

LG pledges to turn around mobile business, earn a profit by 2021

The White Door is a stylish point-and-click adventure game from the creators of the Cube Escape ...