Your smartphone's screen is a glutton. Sure, it may be beautiful, high-res, and with action as smooth as silk, but every second you're staring at it your phone's battery is just ravenously being sucked dry. Manufacturers have been working since smartphones existed to mitigate that problem, but progress has been a series of baby steps. Now a new tech promises to turn screen power consumption on its head, adapting the sort of low-power B&W e-ink screen you'll find on devices like Kindles to show a full range of colors.

This year at CES, Hisense is demoing a pre-production handset featuring just such a color e-ink display. The company has already dipped its toe in the e-ink space with phones, releasing the Hisense A5 with a B&W e-ink panel. But when this new model comes to market, it threatens to be the first smartphone ever to combine the power savings of e-ink with a color screen.

E-ink is a markedly different technology from the screens you'll find on standard phones. Whereas the LCD or OLED display on your handset is constantly emitting colored light in order to form its picture, e-ink screens rearrange the position of pigment in hundreds of thousands of microcapsules. It's like the difference between painting a picture and projecting one onto a wall; turn off the projector and the image goes away, but a painted one remains. In the same way, an OLED or LCD is constantly consuming power when it's on, while an e-ink screen only needs power when the image on the display changes.

In theory, that sounds great. In practice? Based on this Hisense model, not so much. 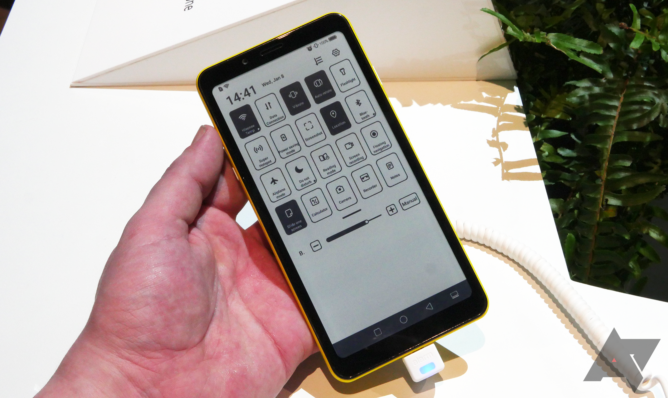 E-ink displays are slow to update, making any kind of motion look more like a slide show. They also suffer from ghosting, where you can still see traces of things previously on-screen even after scrolling or switching apps. Neither of those are unique to color e-ink screens, but adding the complication of color to the equation sure isn't helping things any.

As for the color itself, it's bland. Saturation looks quite low, and at times you'll forget the screen is color at all. While the panel's supposedly capable of reproducing 4096 colors, you wouldn't know it from using this handset.

On the plus side, battery life for this still-unnamed Hisense model should be predictably stellar, with claims of lasting up to four days between charges. Of course, that's going to vary based on how often you need to engage the screen's backlight (a necessity when ambient lighting is too low to see the otherwise-unlit panel).

I would love to get to the day when color e-ink screens are fast and attractive enough to compete on the same level as LCDs and OLEDs, and Hisense's effort is absolutely a step in the right direction. But right now the screen doesn't make for much more than a interesting tech demo, with trade-offs all over. There's at least the possibility that some of those issues may be addressed by tweaking the software that controls the color e-ink display, but for the moment you're almost certainly better off sticking with a regular phone, power-hungry screen and all. 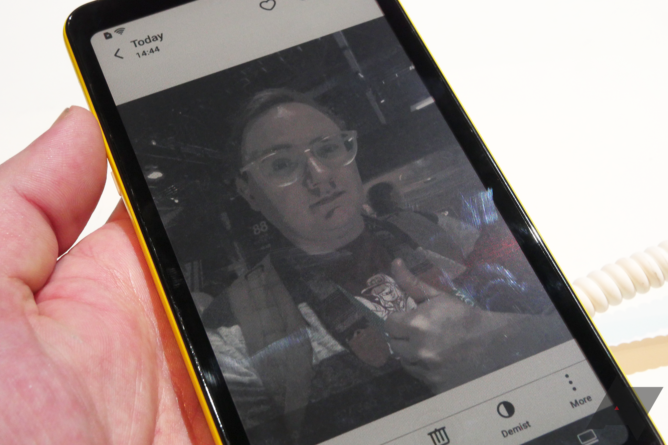 New Game of the Day card spotted in Chrome for Android, takes you to a different browser game ...