D-Link’s venture into the connected home space has so far been focused on security cameras, while other categories have taken a back seat. That may not change anytime soon as the company today announced two new additions to its Wi-Fi-enabled camera lineup just days before CES 2020 is set to kick off. The camera pair supports some AI-based security features that work without cloud video processing.

Leveraging edge-based AI, both cameras can recognize human faces and detect the sound of glass breaking using offline video processing. This, according to D-Link, helps send out alerts faster and with more accuracy. If you have privacy concerns about storing your camera feed on an off-site server, the company offers you the option to pop in a microSD card of up to 256GB or use ONVIF Profile S for connecting your NAS unit. You can also still pick one of the free and paid cloud storage tiers from D-Link.

Both 1080p cameras support two-way audio, and besides working over Wi-Fi, they can also take in an ethernet cable for a more stable connection. The two cameras are managed through the mydlink app that has integrations for both Google Assistant and Amazon Alexa.

The outdoor model (DCS-8526LH) has a couple of additional security measures, such as a spotlight and siren that can be set to trigger when motion is detected. The indoor model’s (DCS-8302LH) design, on the other hand, allows for a full 360-degree pan that is controlled using the companion app. Though D-Link will showcase these two cams at CES next week, they will not be available until later this year. The outdoor camera will ship sometime in Q3 2020 for $119.99, while the indoor model may come out a bit early in the second quarter for $99.99.

D-Link has added a new security camera to its CES 2020 lineup, which is designed for outdoor use, thanks to its IP65 rating and safety features. The wall-mountable cam has a 400-lumen LED spotlight sitting beside a sensor enabled for night vision. It features two-way audio, a built-in siren, and the capability to detect people and the sound of glass breaking, much like the two previously announced cameras. You have the option to trigger the alert light and sound by giving voice commands to the Google Assistant or Alexa. 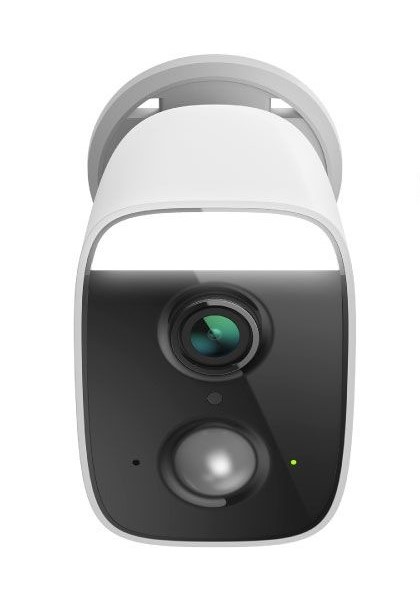 The camera will come in two variants—DCS-8630LH and DCS-8627LH. Of the two, only the former will have a built-in Zigbee hub, while other features should remain unchanged for both. Though D-Link refrained from divulging any price details, it revealed that the camera would go on sale before Q1 2020 ends.