In spite of the fact that smartphones just don't make for great gaming platforms, there's no shortage of gaming-centric phones on the market. Xiaomi's Black Shark 2 Pro is the latest one to hit the market, going toe-to-toe with offerings from ASUS, Razer, and ZTE. The Black Shark 2 Pro certainly looks the part, and at $599 in the US, it offers some great specs for the money. That said, unless you champion the Android video game experience over all else, you're probably better off looking elsewhere.

Obviously, this is not a conventional-looking phone. The Black Shark website says that the design was inspired by F1 race cars, though I can't say I see the resemblance. To my eye, it looks more like an Alienware product; my Iceberg Grey review unit even shares the same silver and light blue color scheme as many Alienware laptops and desktops. The phone is primarily aluminum with a glass insert on the back. In the center of the glass insert is another strip of aluminum that contains the Black Shark "S" logo. The power button is on the right, with the "Shark Space" toggle directly above it. The volume rocker is on the left. Overall build quality is fantastic; the phone is well put-together with nice materials. There's also a ton of RGB lighting: the "S" logo and two vertical bars on the back, as well as a tall vertical bar on the left and right sides of the phone. 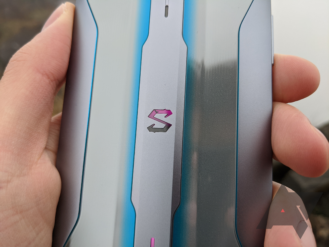 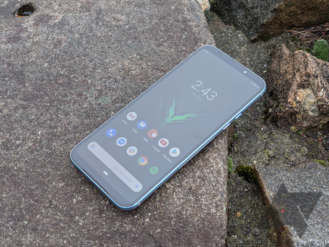 The 6.4" OLED display is nothing special, though the sheer size does make the phone a bit unwieldy. It uses the now-ubiquitous 19.5:9 aspect ratio, hence the strange 2340x1080 resolution. Max brightness is 430 nits, which is average at best. Colors look alright, too. I was really expecting a 90Hz or 120Hz display given that this is a gaming phone, but we're stuck with an old 60Hz panel here. The screen is pretty mediocre when compared to flagship phones these days, but then again, the Black Shark 2 Pro costs a lot less than most flagships. I do have a bone to pick with the auto-brightness, though; it's always either too bright or too dim in the dark. The phone has a plastic screen protector pre-installed. It does an okay job at resisting fingerprints and scratches. 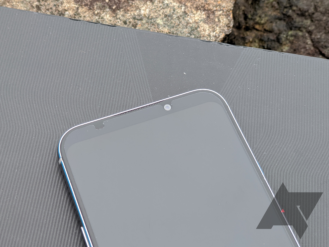 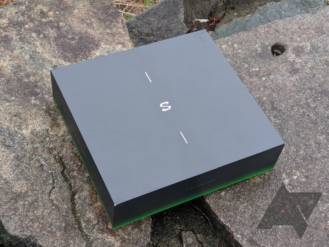 Phone speakers are never "good," only "less bad," and the Black Shark 2 Pro's dual front stereo setup isn't one of the better ones I've experienced. In terms of quality, it's alright, but it doesn't get as loud as my Pixel 3 or Pixel 4. I had no complaints about the call quality — I heard the person on the other end loud and clear, and I got no complaints from callers. I wasn't very impressed with the in-display fingerprint sensor, either; it requires you to position your finger very precisely and necessitates a retry pretty often. Even with no hiccups, it's still quite slow. 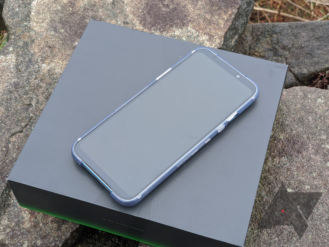 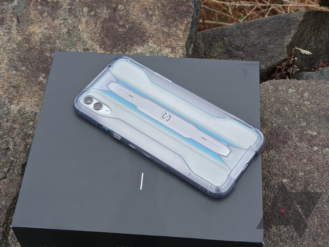 You get a lot of stuff when you buy a Black Shark 2 Pro. Like every other phone, there's a wall brick, a USB-C cable, some paperwork, and a SIM ejector in the box. Xiaomi also gives you a USB-C to 3.5mm adapter, a clear case, a pre-installed screen protector, the left gamepad, and the mount for the left gamepad. I don't know why only the left gamepad is included by default, as it's not very easy to play games with just some physical controls on the left. My review pack also included the right gamepad ($37.90) and the plastic shell required to use it ($19.90).

The gamepads easily connect to the phone independently via Bluetooth. The left one has a joystick, while the right one has a touchpad. There are two triggers atop each, and the light bars on the sides of the phone light up whenever something is clicked. The little triangle outlines that glow green are buttons that allow you to control where on the screen each joystick/button taps. The gamepads themselves are about what you'd expect, with clicky buttons and the typical controller layout. It's a bit annoying that the gamepads have to be charged independently, but I guess there's not much alternative when you include the left one for free and charge an extra fee for the right one. At least they use USB Type-C.

As you might expect from a phone with a 1080p display, the Snapdragon 855+, and 8GB of RAM, this thing has never shown any frame drops or other signs of lag. It also didn't get very hot even under some extended gaming use, which can probably be attributed to the liquid cooling inside the phone. You could upgrade to the 12GB RAM / 256GB storage model for $100 more, but that amount of RAM is just silly, and most people really don't need 256GB on their phone. However, keep in mind that the Black Shark 2 Pro doesn't have a microSD slot. At least the storage that it does have is UFS 3.0. 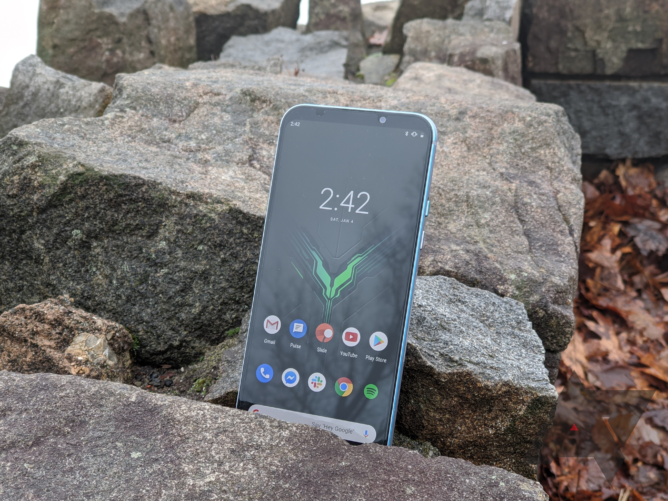 Based on Android 9 Pie, JoyUI uses a pretty close-to-stock build. I was excited to see this initially, though I found myself disliking it the more I used it. For starters, there are just some stupid oversights that could have easily been fixed before primetime. The icons in the status bar are way too close to the corners of the rounded display. There are various translation errors throughout the interface that make it clear this is a Chinese phone first and foremost. There's no way to quickly access the camera without entering your PIN. I also found the vibration motor to be a bit too harsh, and there's no setting to turn it down. It's things like this that just make the phone feel unpolished.

Because this thing is basically running Pie with a few add-ons, I'll just go over the add-ons here. For starters, there's a ton of customization for the RGB lighting around the phone. The lighting on the back can be set to a variety of colors, including rainbow, which cycles through all of them. You can also control what the lights on the side do when the phone is powering on, when there's a call incoming, when you have a notification, and when the phone is charging. In fact, you can even choose different effects for known contacts and certain apps. The last RGB gimmick I'll mention is its ability to pulse to the music that you're playing in different colors. Of course, all of this can be turned off, but where's the fun in that?

There's also "Game Dock 4.0," which Xiaomi calls the "Ultimate Gaming Dashboard." It gives you quick access to things like performance stats and the ability to mute notifications, and you can even have performance stats overlaid on the screen as well. "Master Touch" is like Apple's 3D Touch, but for gaming applications. Basically, you can program touch zones by pressing lighter or harder. Xiaomi also says that its display is twice as quick as other display's response times, though I can't say I really noticed any difference.

If you're a Candy Crush master like me, you need this phone.

The only other real add-on is the toggle on the right side above the power button to enter "Shark Space," which instantly puts you into an arcade mode of sorts. When you move this slider up, a very '90s animation plays on the screen, all of your background processes are closed, all calls and messages are muted, and you're brought into a weird showcase display where only games are shown. You can manually add other games if some of yours don't show up here by default. It's definitely an interesting idea, but only the most hardcore gamers out there will probably ever use it. I wish the toggle could be reprogrammed to do something else.

Battery life on the Black Shark 2 Pro is phenomenal, but that's not surprising given the 1080p screen and 4,000mAh battery. I was able to get 7-8 hours of screen-on time per charge with my heavier usage, which makes for quite a big difference from my Pixel 4's four hours of SOT. 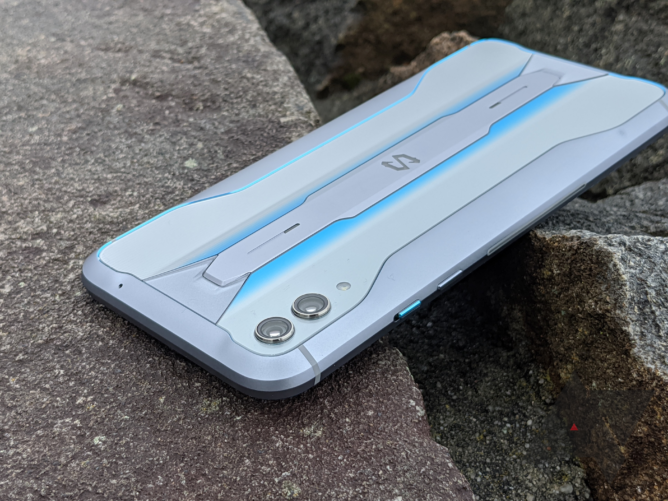 One of the main reasons that I always find myself going back to a Pixel is the camera. Going into this review, I wasn't expecting the Black Shark 2 Pro's camera to be anywhere near as good as the Pixel's, but it's a bit better than I expected. The Black Shark 2 Pro has two sensors on the back: a 48MP Sony IMX586 and a 12MP telephoto. Like most modern smartphone cameras, this phone takes good images in good lighting, albeit with a little too much post-processing for my taste. The colors are also a bit muted. This phone actually does reasonably well in situations with poorer lighting — even better than the Pixel 4 in some situations. For instance, in the photos of the garbage can below, the Black Shark actually produced a much sharper image than the Pixel. The top and bottom rows are with the normal and telephoto lenses, respectively.

However, when there's very little to no light out, the Black Shark 2 Pro struggles. I also noticed that it has a tendency to correct the lighting to a completely different color. There is a night mode available, but it's nowhere near as competent as the Pixel 4's Night Sight. It only brightens things up by the slightest amount at the expense of image detail. Night Sight takes a bit longer, but it produces a much cleaner and more detailed result. The top row of photos below was shot normally, and the bottom row was using each phone's night mode.

By default, the 48MP sensor condenses everything into a 12MP image, though there is a "48M" camera mode that'll process an image with all of the megapixels you could want. I took several sets of identical photos, one in standard and the other in 48M mode, and genuinely couldn't tell the difference between the two. Either the phone is already going a good job of compressing 48MP worth of data into 12MP, or the post-processing is just destroying the detail. I suspect it's some combination of both. 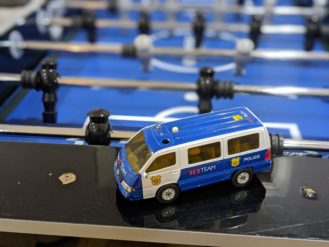 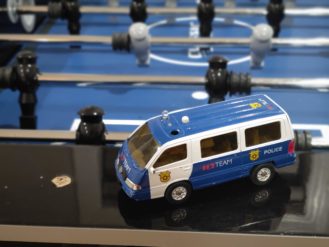 I also tried out the portrait mode, which is alright. Above, you can see that the Black Shark 2 Pro gets a bit confused around the roof of the toy van, but it does a better job at separating everything else from the background than the Pixel 4. However, it does need to be quite a bit further from the subject than the Pixel 4, which may or may not be an issue for you depending on the scenario of the photos you're taking.

If you take a lot of video, you should probably know that the Black Shark 2 Pro doesn't do a particularly good job in that regard. I found that the stabilization wasn't great, and the microphones would pick up background noise a bit too easily. Plus, it was noticeably grainier than the Pixel in low light conditions.

Maybe. If you prioritize the gaming experience above all, the Black Shark 2 Pro is pretty enticing. It has a big screen, a huge battery, excellent gamepad support, and a lot of RGB lighting (if that's your thing). It also has some pretty great specs for the money. That said, the software experience leaves something to be desired, and there are quite a few features that are present on many competitors missing here. The slow fingerprint sensor and irritating auto-brightness don't help.

The Black Shark 2 Pro is a pretty good phone, but I can't help but think that the $599 OnePlus 7T or $499 OP7 Pro would be better for 95% of enthusiasts. Those phones offer similar performance, less controversial designs, more features (including 90Hz displays), similar battery life with faster charging, and more refined software. Today's phone marketplace has more fierce competition than ever, and "pretty good" sometimes just isn't enough. 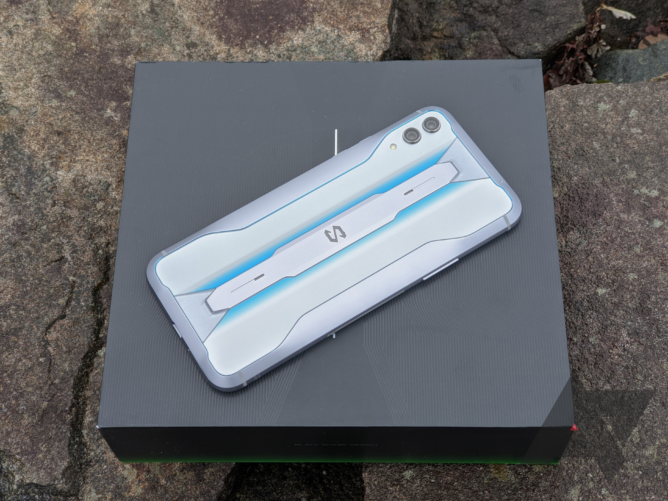