Assistant in the smart home

For many, the key strength of the Assistant isn't on-device use, but smart home controls in a household crammed with Assistant-compatible speakers, displays, lights, thermostats, security cameras, and other gadgets. Google is rolling out plenty of new features in the coming days that expand in-home functionality.

New Scheduled Actions will allow you to issue commands at set times, complimenting existing Routine functionality even though it doesn't fix the current issues with scheduling routines. Still, it opens the door for plenty of new automation options. One example Google provides is setting your coffee maker to start brewing in the morning, but it can be used in all sorts of ways. The only caveat is that you won't be able to schedule them to repeat — at least, not at launch.

Soon you'll also be able to control more types of devices from the Google Home app itself. So if talking to the Assistant isn't your thing (which is understandable), you'll be able to issue more types of commands to more hardware directly via the Home app instead.

Google also tells us to anticipate more Assistant-integrated hardware later this year — including full Assistant functionality in upcoming TVs from companies like TCL, Hisense, and Samsung — and setting up some of these new devices should be a bit easier. Configuring all your smart gadgets to talk to the Assistant is sometimes pretty difficult, but Google hopes that manufacturer's apps will be able to connect even better to the Google Home app, prompting you with things like notifications or in-app suggestions to connect to the Assistant.

Assistant on your smart display 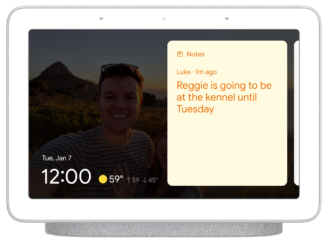 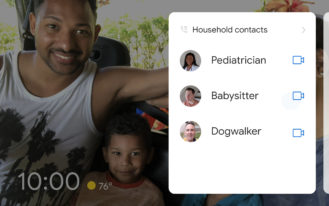 Augmenting all the new smart home changes, touchscreen-equipped smart displays are also picking up a few new features over the next year. Google is giving its Assistant-powered screens sticky notes under the less obvious, branded name of "household notes." You'll be able to create them with just your voice, leaving a big yellow note on the display for everyone in the household to see, and anyone can view or make them without needing to have their account connected. "Household contacts" is Google's similarly superfluous name for a new speed dial feature that's also coming to Smart Displays.

The other headlining feature of today's announcement is definitely a new Read It mode. As the name suggests, it allows the Assistant to read you longer content, like a short story or this very article, right off your phone's screen via a new, more "natural-sounding" voice. When it's live, just say "Hey Google, read it," or "read this page." Audiobook lovers that hate the tedium of actually reading the news will probably be big fans, if it works well.

There's no word on when it will launch, though, and it isn't live for us in our own testing. Google says it's "previewing" it now. But when it does, it will even be able to translate content into 42 different languages, with features like auto-scrolling and text highlighting being looked into.

Interpreter mode, announced at CES last year, is also expanding to more businesses, including a handful of hotels and airports. (This is a fancy way of saying some more companies have tossed a smart display on a counter.)

In the wake of ongoing Ring privacy concerns and the recent Xiaomi snafu that let one Google customer peek through others' security cameras, Google is also taking the Assistant's privacy settings seriously. The company is announcing two new commands to further augment control of your data. When the Assistant activates accidentally and you'd rather it forget what it heard, you can follow up by saying, "Hey Google, that wasn't for you." Although Google says it isn't saving audio recordings by default, you can also review and change your existing privacy options with just your voice by asking, "Hey Google, are you saving my audio data?"

This isn't all we'll see from the Google Assistant this year, but it's a good peek at the future of the platform, even if most of these features won't be landing for a while. By the time Google I/O rolls around later this year, we'll probably see more of this new functionality officially land or start appearing in public testing.