Google has officially posted the January 2020 security patch OTA files and factory images for the Pixel 4/4XL, 3a/3a XL, 3/3 XL, and 2/2 XL. You can sideload/manually flash these updates if you'd like, or you can wait for the update to roll out via the traditional method (which we can confirm is already happening now). Just note that there are a few carrier-specific images for some of the devices, should you install it yourself. 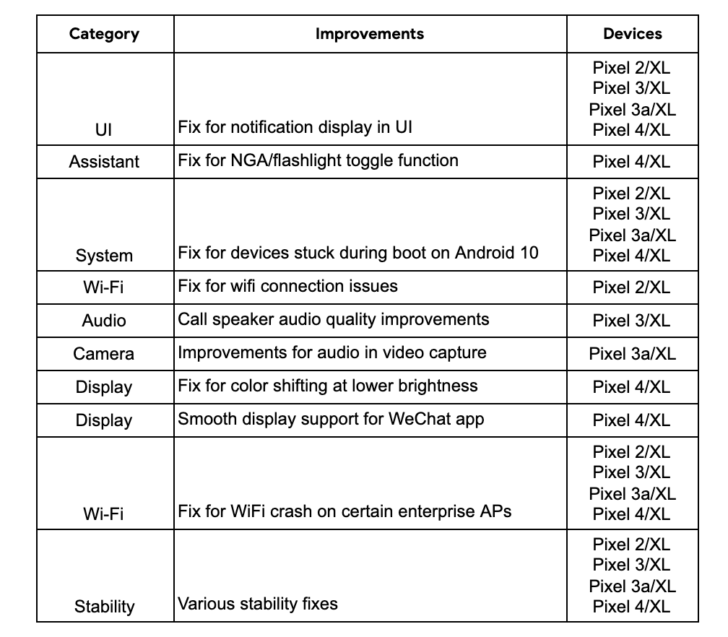 Among the more significant tweaks are a fix for the Pixel 4 and 4 XL's color at low brightness levels. As noted by the (excellent) display analysis at XDA Developers, the way the Pixel 4 XL mapped color at low brightnesses was not great, resulting in a visibly messed up gamma. (I hated using the phone at night because of it.) This change sounds like that might finally be fixed — though I'm not sure why Google would include the smaller Pixel 4 on the fix, since it didn't appear to suffer the same issue.

Gamma at the lowest brightness level seems slightly improved, but the display on the Pixel 4 XL still tints a bit green at lower brightness levels. Personally, I had hoped for more of an improvement, and I still prefer the display performance of other devices at night.

Plenty of other tweaks including call, camera audio, and Wi-Fi improvements; a bootloop fix; and a notification UI fix are also included, plus support for WeChat at 90Hz. As always, tons of security patches are also included in this release, including a handful of "high" and "critical" fixes, so it's in your best interest to install the update sooner rather than later.

As noted, we've spotted it rolling out to at least some of our own devices already. Hopefully, this new "joint" January/December update doesn't take as long to land for all our readers as previous updates did. Plenty of Pixel 4s are still running November's patches (or earlier).

TCL foldable concept hands-on: A promising tease with a long way to go