The Chromebook Flip C434 is Asus' flagship Chrome OS device at the moment, released in mid-2019 as a follow-up to the popular C302. Now it's time for the C434 to be replaced, as Asus has announced the new Chromebook Flip C436 at CES 2020.

The new model isn't quite as much of a design departure as the C434 was from C302, but there are still a few improvements worth mentioning. The Chromebook Flip C436 still has the same aluminum frame, but it's even thinner: 13.76mm compared to the C434's 15.7mm. There's also a new fingerprint sensor, a quad-speaker array with Harman Kardon-certified audio, and an iridescent 'Aerogel White' finish (a regular silver model will also be available).

Annoyingly, Asus has removed the USB Type-A port that the C434 brought back, leaving only two USB 3.0 Type-C connectors (plus microSD and a headphone jack). The screen is also still limited to 1080p, if that matters to you.

The internal hardware is where most of the upgrades are. The C436 is among the first Chromebooks to use 10th-generation Intel Core CPUs, with either 8GB or 16GB RAM (up from 4GB on the C434). Depending on the model, you'll get anywhere from 128GB-512GB storage, but all configs have super-fast NVMe SSDs. Thanks to the new Comet Lake processors, the Chromebook also supports Wi-Fi 6 and Bluetooth 5.0. 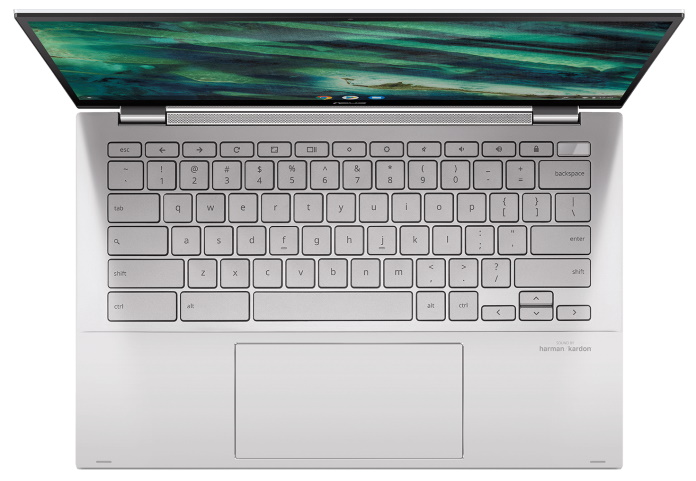 The Chromebook Flip C436 should go on sale in the first or second quarter of 2020. Pricing in the US hasn't been revealed yet, but Asus told us it will be £899 in the United Kingdom. Asus always sells different hardware configurations in different regions, so it's impossible to tell right now how much it will cost in 'Murica.