Fossil announced its new line of hybrid smartwatches earlier this month, after weeks of rumors. While the company has made hybrid wearables before, the e-paper screen makes this iteration much closer to what you might get from a full-blown smartwatch.

The Hybrid HR represents a big leap for Fossil, as it tries to develop its own software stack for wearables without the backing of Wear OS and Google. As is usually the case with first-generation products, this watch is a bit rough around the edges.

The Hybrid HR comes in two distinct models: the gold HR Charter, and the black HR Collider. There are multiple frame and band styles for each, and you can always use custom 22mm straps. I was sent the HR Collider with the silicone band, though if I were buying this for myself, I probably would have chosen the brown leather version. 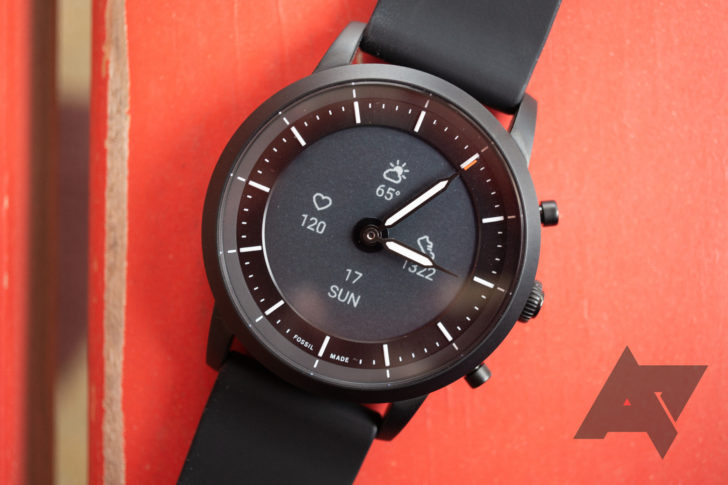 Unlike most smartwatches, which display the time and other information on a digital screen, the Hybrid HR places physical clock hands above an e-ink screen. The tips of the hands blend into the background of the e-ink screen, and there is no hand for seconds, but I don't really have any complaints otherwise. If the hands are obscuring the screen, a flick of the wrist will spin them around for a second.

The e-ink part of the watch face displays four widgets. The default set includes the current temperature, daily step count, date, and last-recorded heart rate. You can change these, but there are only a few additional options — the chance of rain, a second time zone, and the number of minutes spent in physical activities.

If you're in a dark room and you can't quite see the screen (or where the hands are pointing), Fossil has integrated a backlight into the Hybrid HR. Tapping twice on the face will activate the lights for a few seconds, though the touch detection leaves a lot to be desired — forceful taps might be required. 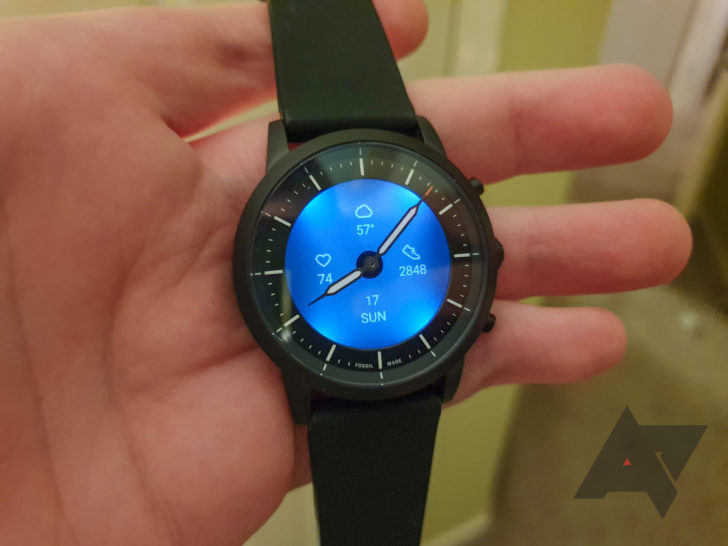 As with Fossil's existing smartwatches, there are three buttons on the side, though the center key doesn't have a dial for scrolling. By default, the top button opens the 'Wellness Dashboard,' the middle one displays notifications, and the bottom button controls music. Holding down the middle key brings you back to the watch face.

In the box, you get the Fossil HR and the USB charging cable. No wall adapter is included, but you probably have at least one spare USB wall charger. 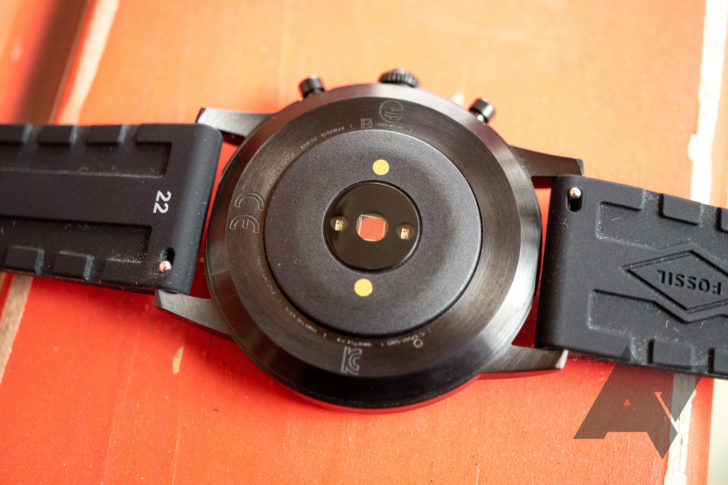 As previously mentioned, the Fossil Hybrid HR uses the company's own software stack, instead of Google's Wear OS. The 'Fossil Smartwatches' app is used for the initial setup process, and for customizing the watch later on. I'll talk about the app first, and get to the watch later.

The Fossil Smartwatches app has four pages, with the home screen showing an overview of your fitness activity. This data can be synced to both Google Fit and Under Armor Record, so you can have the Hybrid HR's step and heart rate information tracked just like any Wear OS watch. Granted, Google Fit isn't exactly a shining example of an excellent fitness tool, but it's better than Fossil's own app.

Next is the Customization page, where you can swap around the icons on the watch face. There are three presets, so you can quickly switch between different configurations. For example, your travel watch face might have a second clock, while your exercise face might have a chance of rain panel.

The third page is for alerts, where you can enable/disable app notifications, set alarms, and filter calls/SMS to specific contacts. That sounds fine and dandy, until you realize that Fossil only allows alerts to be mirrored from 13 apps. If you get a notification from an unsupported app, nothing appears on the watch.

As of the time of writing, these are the supported apps:

I only use two of the above applications (Google Calendar & Gmail), so you can imagine how frustrating it was to feel my phone buzz in my pocket and see nothing on the watch. Most of my notifications come from Slack, Skype, and a third-party Twitter client — none of which are compatible with Fossil's app.

When I asked Fossil about this, the company told me that an update is coming to the app by the end of the year, which will significantly expand the list of supported apps. Here are the upcoming additions:

The updated list is certainly better, but it doesn't solve the fundamental issue with having a whitelist system: there will always be apps missing. There are more email applications than stars in the sky, but only two are supported right now (Gmail and iOS Mail), with one more on the way (Outlook). Google Inbox is also on the list, even though the app stopped functioning back in April. With the Fossil Hybrid HR, anything is possible — even time travel.

Moving on from that, the final page displays information about the watch and your Fossil account. You can check for firmware updates, view the watch's battery life, change your health information, set fitness goals, and so on. Now we get to the watch itself. There's no rotating dial or touch screen, so all navigation and controls are performed by pressing the side buttons. The top and bottom buttons generally function as up and down keys, respectively, with the center key acting as a confirmation/selection button. Like on Wear OS and Tizen, holding down the center button will take you back to the watch face from anywhere. 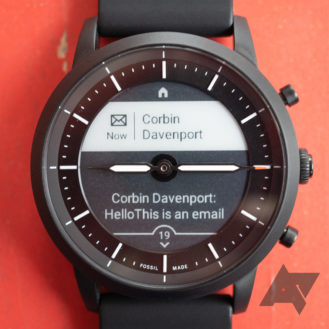 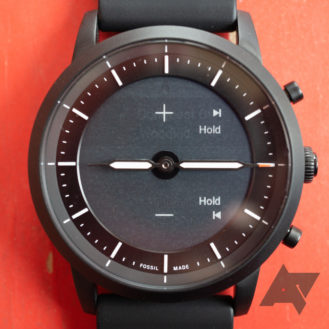 First, pressing the top button takes you to fitness information. If you click the bottom button on this screen, the watch will record your heart rate. Pretty simple.

A single click of the middle key takes you to your notifications. You can scroll through them with the top and bottom buttons, but only the first two lines or so can be seen. To see the entire message, you have to open it by pressing the center button, then scroll through it with the top and bottom keys. A little bit clunky, but workable. You can't respond to messages at all.

I already complained about the poor notification support, but there's one more thing wrong with alerts on the Fossil Hybrid HR: clearing them on your watch doesn't clear them on the phone, and vice-versa. At the end of the day, my watch still has all the email notifications I cleared from my phone hours prior. 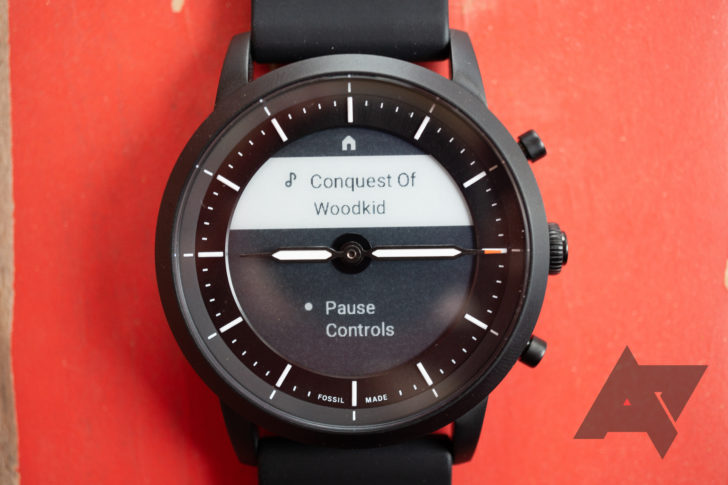 Next, pressing the bottom button takes you to media controls. The main screen shows the name of whatever you're playing, and the center button acts as a play/pause control. If you select 'Controls' (which takes two key presses), you can access volume and skip/rewind features. A lot of steps are involved for something as simple as turning down music.

Finally, holding down the middle key for a few seconds opens something akin to quick settings. You can check the current battery level, turn notifications on/off, and ring your phone. 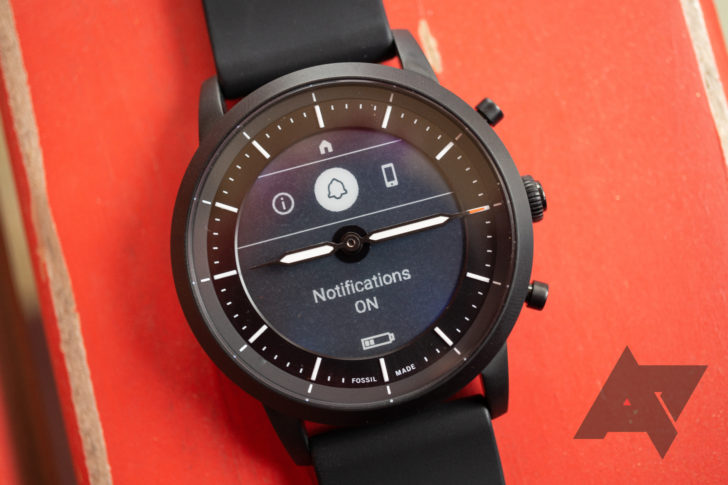 Battery life is one area where the Fossil Hybrid HR is fantastic. The company estimates that the watch should last "up to 2 weeks" on a single charge, and that seems to be accurate in my testing. I received the watch from Fossil when it was around 80% charged, and over a week later, I'm at 22%. I haven't even taken the power cable out of the box.

Maybe. This is a hybrid smartwatch, not a full-blown smartwatch, so you don't get features like NFC payments or third-party apps. Despite what the e-ink screen might hint at, this is not the second coming of Pebble — it's more akin to what Withings has been selling for years.

I could excuse the Hybrid HR's minimal software customization and slightly-clunky controls if it could display notifications properly, but Fossil has dropped the ball by limiting alerts to a selection of hand-picked apps. The upcoming app update should make the situation better, but I'm still not sure why there is no option to see all notifications, like there is with every other wearable platform. Even the expanded list doesn't include Google Voice, Signal, Samsung Email, Facebook Messenger Lite, and countless other apps. (see the update below)

If the limited functionality doesn't bother you, the Hybrid HR is a great-looking watch with enough 'smart' functionality to keep most people happy. I hope Fossil can improve the software experience over the coming months, but in the meantime, a Wear OS watch is going back on my wrist.

In the time since I originally published this review, Fossil has fixed my main complaint with the Hybrid HR. The watch is no longer limited to showing notifications from a handful of whitelisted applications — it can display alerts from any app installed on your phone, just like Wear OS and Samsung's wearables.

There are still a few quirks, though. For one, when an app updates the contents of an existing notification, the Fossil Hybrid HR treats it like a new alert and buzzes you. I had to disable Google Maps notifications because the watch wouldn't stop vibrating while I was in navigation mode (due to Maps refreshing the notification with the distance to the next turn).

Also, not every notification has the right app icon — presumably because Fossil has to make gray-scale versions of each icon. This isn't a huge problem for me, since the watch still shows the name of the app in each alert, but there's a modded APK that claims to add support for all icons.

The mobile app also now allows you to set custom background images for the watch face. While there's not as much room for customization as with Wear OS watches, you can still pick from a collection of pre-made images or import your own wallpapers. The r/FossilHybrids subreddit has been sharing wallpapers that look best on the watch's e-ink screen, if you're looking for suggestions. 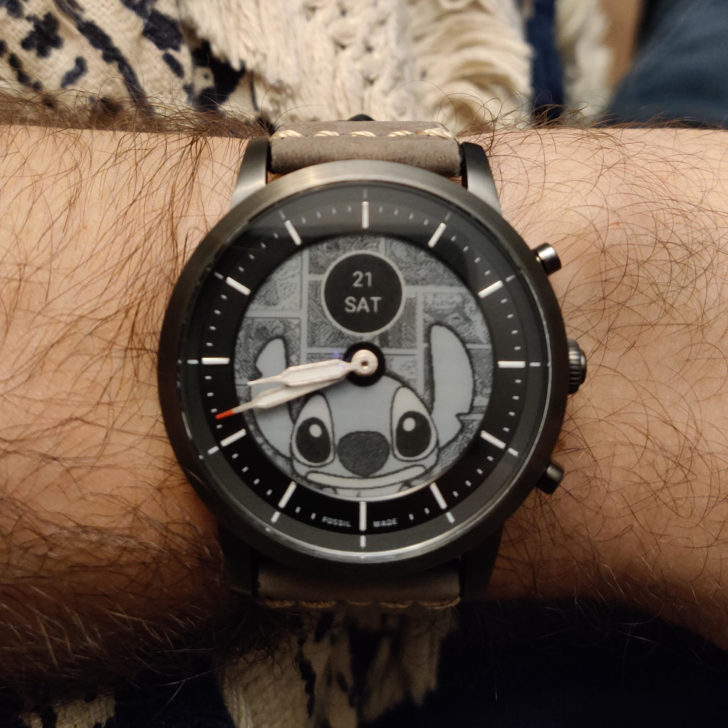 Custom background on the Hybrid HR (credit: StaticMoot on Reddit)

With these improvements, I'm raising my score of the Fossil Hybrid HR from a 6/10 to an 8/10. There's still a lot of room for improvement (clearing alerts on the watch still doesn't clear them from my phone), but the Hybrid HR is now a watch I can reliably use every day.

12 new and notable Android apps from the last three weeks including Typewise Keyboard, ...