Now that we’re nearing the end of 2019, Samsung appears all set with its 2020 Galaxy A lineup that bridges the gap between flagships and budget handsets. The South Korean tech titan today introduced a pair of smartphones under the series — the Galaxy A71 and the Galaxy A51. The two phones pick some of the most identifiable features from their more premium siblings in the Galaxy S and Note series, while still maintaining their relatively affordable prices.

The Galaxy A71 has a 20:9 6.7-inch FHD+ Super AMOLED display on the front with a hole-punch camera in the center, akin to the Galaxy Note 10 models. There is a fingerprint scanner underneath that display, but we can’t surely say if it’s of the optical or ultrasonic variety. On the inside, you’ll find an octa-core Qualcomm Snapdragon 730 running everything along with up to 8GB of RAM and 128GB of expandable storage.

Aside from that, the Galaxy A71’s back houses a cluster of four cameras, one of which is a macro lens, while the primary shooter has a 64MP sensor. It’s fueled by a 4500mAh battery that supports fast charging using a 25W brick. The phone is said to come preloaded with Android 10-based One UI 2.0, though Samsung has yet to confirm this fact. 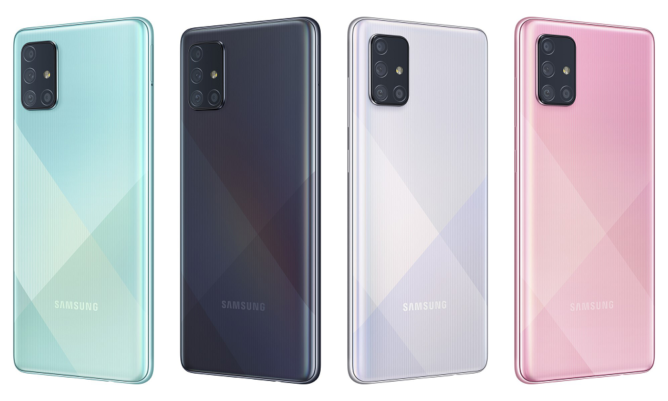 Right now, we don’t have any detail on how soon you can grab the Galaxy A71 in your country, nor do we know its retail price. But we hope these details will emerge when Samsung begins the rollout process.

Despite being positioned below the Galaxy A71, the Galaxy A51 isn’t really all that different. You’ll find a slightly smaller 6.5-inch FHD+ display that still has a hole-punch camera and an in-display fingerprint reader. The A51 offers an additional RAM and ROM configuration of 4GB+64GB and has a smaller 4000mah battery with 15W charging support. Its primary sensor has a lower 48MP resolution and f/2.0 aperture versus f/1.8 on the A71. 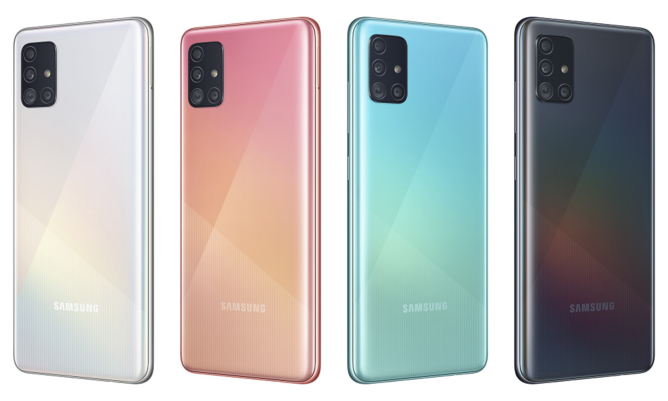 The Galaxy A51 has already got a price tag of 7,990,000 VND ($347) in the Vietnamese market. Those in the country can preorder the handset starting Monday, December 16, with shipments expected to begin after Christmas, on December 27. Samsung is throwing in a pair of Bluetooth earphones and a 10,000mAh battery pack with the preordered units. There is no detail on when we can expect the A51 to hit other markets.

Ahead of CES 2020, Samsung has announced the availability details for both phones in certain markets of Europe. In France, the lower-end A51 will go on sale by the end of this month, while the A71 is set for early February. The UK has a more definitive launch date, where both phones will be shipping together starting February 7. The Netherlands-based GalaxyClub.nl could source their local pricing — €369 (~$412) for the A51 and €469 (~$524) for the A71. Converting these prices in your local currency won’t necessarily give you the right number, the actual pricing may vary in your region.